The strike that lasted for six days ends on the morning of June 26. 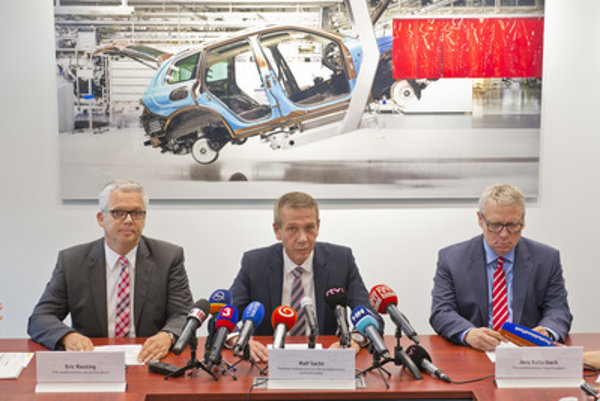 L-R: Volkswagen Slovakia board member for HR, Eric Reuting, chair of the board Ralf Sacht, and board member for finances, Jens Kellerbach, at press briefing after strike, June 26 (Source: TASR)
Font size:A-|A+

After more than 10 hours of negotiations on Sunday, June 25, the Modern Unions Volkswagen (MOV) agreed on a new collective contract with the employer – one of the biggest in Slovakia – the Sme daily wrote.

“We end the strike, with all points concluded,” head of MOV Zoroslav Smolinský said.

This means that in the third tariff category, salaries will be higher than they were before the strike by €280. 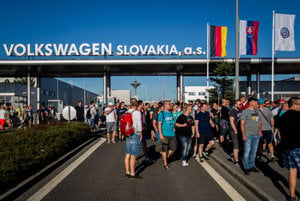 The hikes mean, in effect, that this year, €13 million more will go for the employees’ salaries, while this will be €13.6 million more in January 2018 and €14.2 million more in November 2018. The payment of extra bonuses - €500 for each of the 12,300 employees - will cost the factory another €6.2 million. Comparatively, the final deal should cost the plant only €42,000 more than was the employer's offer before the strike, although the costs look higher in absolute numbers. However, when the costs are spread over 27 months, the difference is not so striking. 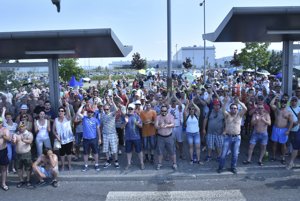 The unions failed, though, to achieve an extension of their breaks; currently, they have a 10-minute break for a snack and 20 minutes for a main meal, and their goal was to extend each by five minutes.

The new contract will be in effect for longer than was originally planned. Earlier talks had had the contract expiring at the end of 2018.

End of a strike - and two different summaries

Although the unions and the employer ultimately struck an agreement on Sunday, the strike officially ends on Monday, June 26, one minute before the start of the morning shift at 6:00.

The strike was senseless, as the new collective contract goes back to the original proposal of the management from April, VW SK leaders said at a press conference on June 26, as quoted by the TASR newswire.

Unionists deny this, however, claiming that the increase in salaries by a grand total of 14.12 percent was only earned because of the strike.

The management presented the longest collective contract in the the plant's history, effective from June 1, 2017 until August 31, 2019. “With this longer contract, we created and secured a long-term perspective for our employees and for the company,” said Ralf Sacht, chairman of the Board of VW SK. “The increase will be secured over 27 months, in three small steps.”

“I would like to thank all those who participated in the strike, as well as those who supported it,” head of the MOV Smolinský said, as quoted by TASR. “Without their effort, we would not achieve this success.”

The strike began on June 20 at 6:00 and had no set end date. Volkswagen Slovakia employees held the longest strike recorded in the country and the first at this Bratislava-based car plant. VW SK refused to specify the damage caused by the halt in production.