The joke’s on you: the borovička hoax

Many people did not get the joke but comment about stupid Americans. 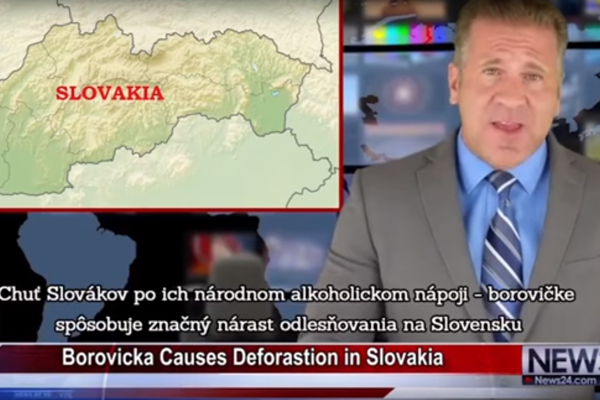 Facebook page Medzinárodný deň borovičky (International Day of Borovička) published a video with the comment: “Have you seen this? Borovička in the US news. Do they really think that we make borovička out of pine?”

The video got thousands of likes, hundreds of comments and thousands of shares. The video brings a news report in English as “breaking news” about the fact that “the desire of Slovaks for their national alcoholic drink Borovička causes considerable increase of deforestation in Slovakia.” The prank is a play on words with the drink Borovička (with borievky, juniper berries) and the word for pine, borovica.

Many people had fun with the video but many reactions proved that some people are taking the video seriously and believe that this reportage was broadcast from America. Comments have been left about stupid Americans and hateful comments directed towards the US and American journalists.

There is no journalist, however, but an ordered actor, the portal omediach.com stated.

The fanpage originated last year as a part of five Slovak producers of borovička initiative to increase interest in this type of alcohol, omediach.com wrote.

The author of the campaign is AMI Communications Slovakia agency.

“We proved that it’s easy to make news that seems real,” said managing director of the company Peter Chalmovský, as quoted by omediach.com. He hopes that people will learn a lesson in not to taking everything seriously and only trusting verified sources of information.