Blog: Why diversity matters in times of conflict

I recently signed the Slovak Diversity Charter, because we need to recognise that the way we behave towards each other matters just as much as the things that we hear about in the news. 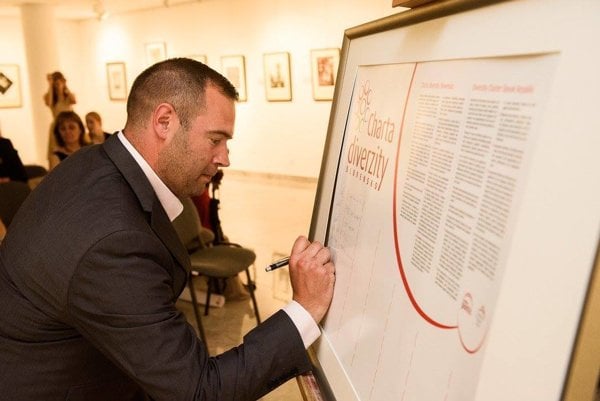 As someone born in the United Kingdom in the 1970’s, I grew up familiar with news reports of terrorist attacks. I also remember that after 30 years of violence over Northern Ireland, the Good Friday Agreement was signed with almost nothing having changed, except for perhaps a realisation on all sides that increased tolerance and acceptance of each other was much preferable to the killing. And I remember that when I eventually met some people from Ireland, I found them to be perfectly normal, intelligent and compassionate people.

There is one story from that time that stands out in my mind because it didn’t involve the IRA (or any of the subsequent IRA spin offs) or the British Security Forces; it involved two groups of Irish school boys, not even old enough to vote, but whose vision of the world had been twisted and shaped by the environment in which they lived. As one boy was walking home from school alone that day, he was noticed by another group of boys because he was wearing a school blazer that identified him as attending a Catholic school. The group of boys were from a Protestant school, and so they grabbed him, dragged him into an alley, and beat him around the head with an iron bar. The boy who was attacked wasn’t known to his attackers, they knew nothing of his habits, his character or his past actions; it was enough that in their eyes he didn’t belong there.

A sad enough story, but it did not end there. While the boy was recovering in hospital, he was visited by some of his school friends, who pressed him to tell them who had done this to him. He told them that he did not know the boys that had attacked him, and could not identify them.

“Don’t worry about it,” his friends replied. “We’ll get one of them anyway.”

Despite his protests for them not to do anything, a few days later he heard about a boy from a local Protestant school who had been severely beaten around the head with a hammer. It was the start of multiple “revenge” attacks between gangs of schoolchildren across the country.

In the context of the bigger stories of bombings and political strife across the UK and Ireland, this story about two schoolboys with no direct ties to political or military organisations got no national news coverage, and only minor local news coverage. And herein lies the problem. The things which happen every day, the little things behind doors and down alleys, the whispered conversations and the mutterings in pubs, are all just as real as the big stories that get the major news coverage. The everyday stories are just that - happening every single day, and their potential to impact our lives are perhaps even greater than the ‘big news’.

This is one reason why I recently signed the Slovak Diversity Charter, because we need to recognise that the little everyday things we do and the way we behave towards each other matter just as much, and have at least as much potential to affect our daily lives and those of our children, as the things that we hear about in the television and from the mouths of politicians.

A few weeks ago a group of companies, together with some NGO’s and the Ministry of Labour department for gender equality and equal opportunities, witnessed the signing of a Diversity Charter for Slovakia, the 16th country in the European Union to do so. The Diversity Charter is open to any company or organisation to sign, and is a simple voluntary statement that we, the undersigned, commit to openness and inclusion in all forms within the workplace, every day and as a normal way of life. If you’d like to learn more and perhaps be a part of that movement, please visit www.chartadiverzity.sk.

Paul Burt is the managing director of IBM ISC in Bratislava. The opinions expressed in this blog are his own.

Thank you for singing up. Shortly an email will be sent to the address you provided to verify your e-mail.
Error! Please try to register again later, your e-mail was not registered.
Your email is not in a correct format.
Please confirm you are not a robot.
Share on Facebook (128)Comments disabled