Twists in development of Vienna and Bratislava

At one point in the history Pressburg, now Bratislava, was bigger and more important town than Vienna. 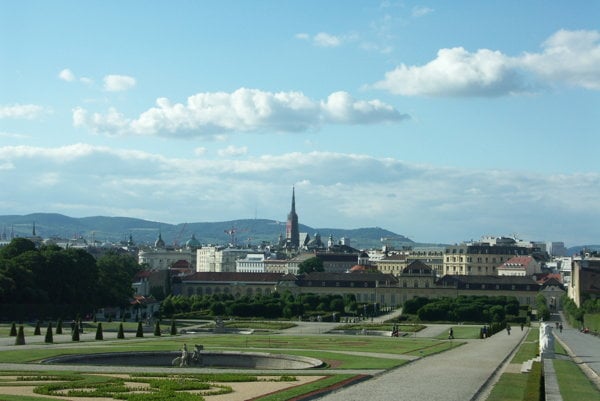 The view from Belvedere palace in Vienna with Wienerwald in the background. (Source: Juraj Šedivý)
Font size:A-|A+

Bratislava and Vienna are the closest capitals in the world, separated from each other by a distance of some 70 kilometres. Developments of the cities, both located close to their country’s borders in the fertile wine-growing regions of the Danube River, offer several parallels. But while the city now known as Bratislava dominated during the Early Middle Ages, two important events of the second half of the 12th century led Vienna to make a huge leap ahead.

“Since that time, Bratislava has never caught up to Vienna,” said historian Juraj Šedivý during his lecture titled “Vienna and Bratislava between 12th and 14th centuries: Parallels and Differences in the Development of the Cities and their Societies” at the Austrian Forum last November. “As a result, Vienna has developed into a big metropolis and Bratislava into a smaller city. This is why Bratislavans commute to Vienna for work and not vice versa.” 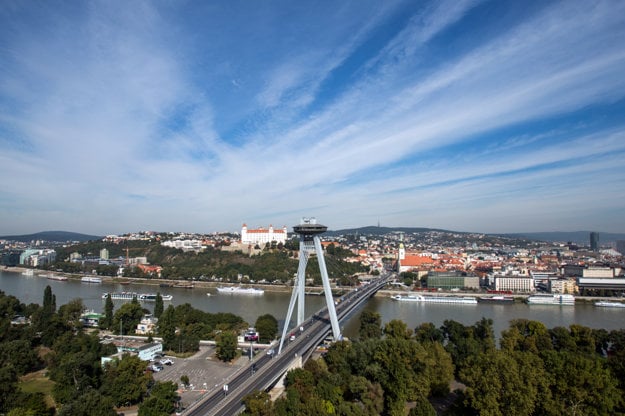 “There are two elements which co-created the history of this whole area and the localities on which Vienna and Bratislava were later built,” said Šedivý. “The first of them was the Danube River, and the second was the southern and south-eastern slopes of relatively low mountains. For Bratislava it was the Small Carpathians, and for Vienna it was Wienerwald.”

About 2000 years ago, the Danube River was unregulated and, apart from its main river bed, there were plenty of branches and wetlands. In Vienna, the dense river’s branches north of it were difficult to pass, which determined that the main flow of traffic would be in the east-west direction.

The situation in what is now Bratislava was different: two inland deltas created here a funnel with a ford.

“As a consequence, for armies and merchants with heavy loaded carriages, it was almost impossible to cross the Danube 100 kilometres up the river from present-day Bratislava or 100 kilometres down the river,” Šedivý said.

The second natural precondition for the development of the cities was the fertile slopes of the Small Carpathians and Wienerwald, which both cities used for growing grapes and producing wine. However, winemakers in Vienna perceived those from what became known as Pressburg, and later Bratislava, as strong competition.

“Wine was the only important export product of mediaeval Pressburg,” said Šedivý, recalling that at that time, in Florence, wine from Pressburg cost three times more than ordinary Ugrian wine.

Another parallel in the development of the two cities during the last 2000 years was their proximity to national borders. For Pressburg this resulted in multi-ethnicity, while in Vienna this was not the case to such an extent.

“It was not as it is now, when developers prefer to pull down all the previous constructions and build brand new development,” said Šedivý, adding that people liked to use what their predecessors had built.

In Vienna the Roman period and the secondary usage of a former Roman military camp was important for the development of the early mediaeval city, while in Pressburg it was the Celts and the constructions they left behind, like on the castle hill, the so-called Celtic oppidum.

“At the turn of the 9th and the 10th century the development of both localities was more or less equal, and this was also the time of their first written mentions,” said Šedivý.

The Salzburg Annals, dating to the 9th and the 10th centuries, noted a battle against the Magyars in 881, though it is unclear whether this mention of Vienna refers to the city or the River Wien.

The first mention of a settlement named “Brezalauspurc”, which would become modern-day Bratislava, dates to 907. It related to the Battle of Pressburg, during which a Bavarian army suffered a defeat by the Hungarians.

The second written mention of Vienna followed in 1030 (when it was captured by Hungarians), while the area that is now Bratislava was mentioned in the same year (captured by Czechs) and in 1042 it was described by a Bavarian historian as a very populated city – civitas populosissima in Latin. Vienna was mentioned as ‘civitas’, or city, only in 1137.

At that time Pressburg was a more populated town with more significance than Vienna. This was proven also by existing churches, as these determined the status of a city. Vienna had two small churches – St Rupert Church, which did not have a tower added until around 1280, and St Peter church, the remains of which have not been found. Castle hill in what is now Bratislava had a larger three-aisled basilica with the highest possible patrocinium – Salvador, or Jesus Christ – and two additional small churches were down in the suburbs.

In terms of political power, Vienna probably had somebody sitting in power who had been charged by the ruler, but it was not a margrave yet. In Pressburg, the ruler himself resided in the city during some periods between the 11th and the first half of 12th century. But apart from him, his representative and a kind of a head of a large region was always present. His position can be compared to the current head of a self-governing region, explained Šedivý.

“To sum this up, both localities were in the 11th century and the first half of 12th century frontier fortresses and to a certain scope multi-ethnic [proven by Slavic names of places in Vienna and German around Bratislava], while the political as well as religious lines indicate that Pressburg played a more important role,” said Šedivý.

The situation changed in the middle of the 12th century, when new processes leading to the High Middle Ages started. At that time something happened that Šedivý compares to the developments in Slovakia during the first half of the 1990s. At the time, the country transited from a totalitarian, communist regime to a capitalist one. All this was accompanied by economic and societal changes.

“While in the Early Middle Ages, the whole land was theoretically the property of the ruler [state], after the change it was ’privatised’. While before magnates were pillars of the ruler’s power, later it was also the towns,” said Šedivý, adding that while earlier people lived mostly in the countryside, later many of them moved into growing cities.

Vienna began to boom when the ruler Henry II Jasomirgott, the Babenberg Margrave and after 1156 also duke, moved his residence from Klosterneuburg to Vienna sometime before 1150. This resulted in the building of new, bigger churches including the St Stephan church and the launch of the Schottenkloster monastery, with a hospital probably existing already at that time. Also entire quarters of palace buildings for the duke and nobility of his court started to be built.

“Thus a small settlement on the border transformed into the residence of the duke of Austria, and this was the first step towards Vienna as a metropolis,” said Šedivý. “The second important event followed shortly before 1200, when Leopold VI, the Duke of Austria, received a portion of a ransom paid for the captured English king Richard the Lionheart.

Thus Leopold VI suddenly had a huge amount of capital to invest.

“Of course, what followed was luxury and opulence, but he also invested in the development of his residential seat – Vienna,” said Šedivý.

During the following two generations, the size of Vienna’s settlement quadrupled. This was no ordinary demographic growth, with the huge investments resulting in a siphoning effect, drawing ordinary people as well as artists, craftsmen, scientists and tradesmen to Vienna to look for their fortune.

“However, Pressburg, located in the neighbouring Kingdom of Hungary, did not experience any similar development,” said Šedivý. “Since then, it has never caught up to Vienna.”