The burnt prints of the penitential reeve’s right hand made Bratislava famous over almost all Europe. Now the story has been almost completely forgotten. 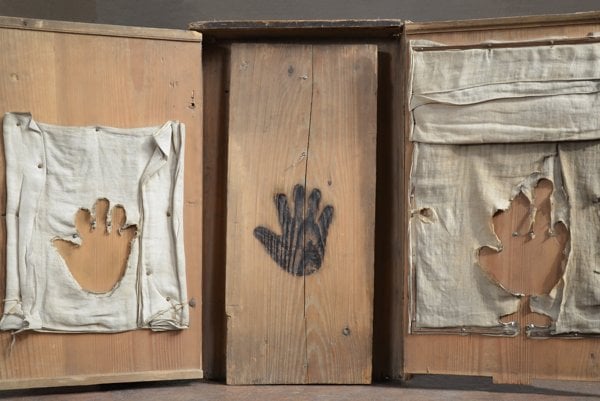 Some years ago, visitors to the St Martin Cathedral treasury were able to see, along with the gorgeous 15th century gothic monstrance, richly decorated chasubles and other precious exhibits, a very peculiar item – a portable box with right hand prints burnt into a wooden board and two shrouds. Today they would be looking for it in vain. A local priest allegedly ordered its removal from the display because of its connection with a ghost story. But as a local guide has confirmed, people keep asking about the burnt prints.

This is nothing surprising as the tale of appearances by the ghost of a penitential reeve, leaving the prints as proof of his existence, was well known nearly throughout Europe at that time. His alleged appearance led to the creation of the Pietà sculpture, part of one side of the cathedral’s altars to this today. In the past, famous pilgrimages set off from this precise place to Mariazell in Austria. Only the arrival of the communist regime in the 1950s ended the cult of the allegedly miraculous sculpture.

“A record of these appearances became a real bestseller at that time,” Patrik Baxa, who wrote a more than 300-page book about the events entitled Pressburg Ghost – Testimony of History, told The Slovak Spectator. “In 1643 alone it was translated into five languages at least.”

The ghost of the penitential reeve

The story, which should be seen in the context of strong Counter-Reformation and recatholicisation, started in 1641. At that time the ghost appeared to 19-year old Regina Fisherin for the first time. First he appeared in her native town of Hallstatt in Upper Austria and later in Pressburg, nowadays Bratislava, where Regina arrived to visit her aunt. Ján, the aunt’s husband, served as a caretaker in Pálffy Palace below the castle. The remains of this palace still exist on Zámocká Street. 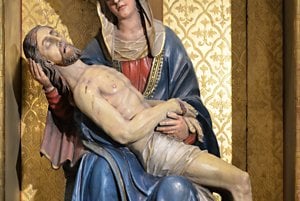 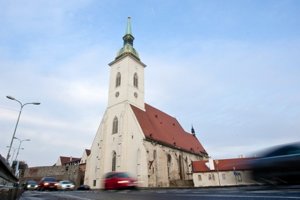 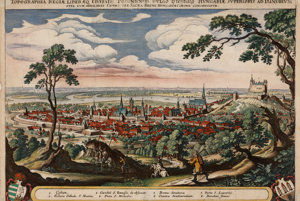 The ghost later introduced itself to her as Hans, i.e. Ján, Clement, also nicknamed Zwespenbauer, a former reeve of Pressburg’s Podhradie. At that time Podhradie, i.e. the settlement below the castle, was an independent village and had, similarly to Pressburg, its own reeve.

The miserable Clement asked Regina to request 200 gold coins of his inheritance from his widow and order a carving of the Pietà sculpture for the main city’s church, meaning today’s St Martin Cathedral. In this way she was supposed to have fulfilled the promise he failed to meet prior to his death. He long ago killed somebody for the same amount of money and even though he regretted his sin, he was not penitent enough during his life. Thus he was unable to rest in peace and instead was suffering in purgatory.

The ghost haunted Regina for almost one year. When the girl was asking for proof of his existence and that he belonged to good spirits, Clement burnt a fiery cross with a silhouette of his right hand on a wooden coffer and a shroud laying on it. Later, he burnt the print of his hand onto another board, a shroud, and also left some other signs. The burnt print on the box had become lost, but the remaining three prints have been preserved to today.

The requested sculpture was finally created in 1642 from the lime wood Clement’s ghost himself helped sculptor Juraj Schiebele to choose. The ghost then detected the completed sculpture of the Virgin Mary with Jesus Christ in her arms with a priest’s stole, a burning candle and a cross.

After fulfilling his requests, the ghost was freed from purgatory and never appeared again.

Immediately after these events, an ecclesiastical trial began, where the clear authenticity of appearance of the deceased Clement was announced, based on the statements of 32 witnesses. Afterwards, the provost Michal Kopchani, at the order of Esztergom’s archbishop Juraj Lippay, published a record describing the whole story in 1643. It was supplemented by a brief description of the investigation process, a list of 32 deponents and illustrations of signs the ghost had left.

The same year the record was published. Apart from its Latin version, there were also at least two German, one Hungarian, three Polish and one Italian version as well as in the then Slovakised Czech language.

Also, several evangelical theologians responded to the story of the haunting. Out of them, for example, Zachariáš Láni defended in his polemic file, published in the same year of 1643, the idea that the Devil himself had taken the form of Ján Clement, writes Baxa in his book from 2016.

The sculpture of the Pietà was installed in an altar located on the south side of the cathedral’s triumphal arch. It was considered miraculous as well as highly cherished and the altar became a place of mystery, liberating deceased souls from purgatory, many miracles and supernatural events. The sculpture brought fame to Pressburg and the “Pressburg Pietà”, also due to its unique attribute – the priest’s stole – can be found depicted in many illustrations.

All these led to the creation of the Cult of the Pietà and the altar was a starting point of famous pilgrimages to Mariazell in Austria in the 19th century. These always started on August 16 and the pilgrims used to reach Mariazell on August 20. The pilgrimages were popular when, for example, chaplain Karol Scherz of St Martin Dome attended more than 70 such pilgrimages. And in 1857, when this pilgrimage site marked its 700th anniversary, as many as 15,000 pilgrimages from Pressburg set out for Mariazell.

“The cult of the miraculous Pietà lasted for 300 years and ceased to exist only in the middle of the 20th century during the communist regime,” said Baxa.

During the time being the sculpture has been installed in the middle of the neo-gothic altar of Our Lady of Sorrows from 1911 at the southern wall of the cathedral. The label near it reads that the sculpture of Pietà was created in 1642 thanks to a ghost story.

Is the story authentic?

During his five-year research Baxa tried to find as many historical documents related to the story as possible. But he did not find original records from the investigation and the trial.

“Maybe they are somewhere. But the archives in which they might be are extensive and moreover they have been moved several times,” said Baxa. “Thus they may only be mislaid somewhere and we will find them only by accident.”

“There were more such cases, also in what is now Slovakia’s territory,” said Baxa. “There is even the Museum of the Holy Souls in Purgatory in Rome.”

The still existing museum holds a collection of “proofs” of visits from the afterlife, most often burnt prints of hands or fingers. Today the original collection is rather thin as some exhibits create very strong doubts about their genuineness.

“But the story about the appearances of the ghost of Ján Clement was the most important and out of all similar cases it resonated across Europe the most,” said Baxa.

The central part of Baxa’s book consists of a translation of the record by Kopchani. Other parts deal with individual persons from the story as well as historical context.

Baxa especially sees the character of Regina’s confessor Jesuit Hieronymous Gladich behind the whole story of the ghost’s appearance. He built his unique life career as a liberator of souls from purgatory on the story of Clement and one of the possible explanations, according to Baxa, is that Gladich himself organised stage-managed appearances of the miserable reeve’s ghost.

But what Baxa points out the most is the historical context in which the story took place and thus the fights between the Evangelicals and Catholics. At that time, each of the rival sides tried to “draw” believers even in very special ways.

“It is clear what is being promoted in this story – reverence for the Virgin Mary and purgatory,” said Baxa. “These are things the Evangelicals don’t acknowledge.”

But in his opinion, the question might not stand as whether the ghost of Ján Clement really appeared to Regina and whether the miracles really happened at the altar with Pietà.

“It is a story from the history of Bratislava, which was very popular and widespread during its time. Today it is completely unknown,” said Baxa, who regrets that many stories from Bratislava’s history are forgotten.

Thus he would be glad if the board and the shrouds with the prints were exhibited again, either in the cathedral’s treasury or in any other museum.

“A whole exhibition about the story could be prepared,” said Baxa, adding that apart from the prints there can be an exhibition of period documents as well as votive offerings or paintings, which believers left to the “miraculous” Pietà in gratitude for hearing their prayers. The Bratislava City Gallery holds about 30 of them. Even though their artistic value is not very high, they show, for example, what people were wearing at that time.

What the Bratislava Archdiocese says

The Archdiocese of Bratislava explained the removal of the prints from the treasury through the re-organisation of the display.

“After thorough consultations with experts in museology and art historians, the display underwent several changes,” wrote Tibor Hajdu, spokesperson of the Archdiocese of Bratislava, in his response to The Slovak Spectator. “Today it is rationalised with respect to the space, and the exhibits are well arranged.”

“We lend items from the treasury collection of St Martin’s Cathedral on the basis of a request,” wrote Hajdu. “Each request is evaluated individually.”

And what is the opinion of the Catholic Church on the appearance of the ghost of Ján Clement and the subsequent creation of the Pietà sculpture?

“There is a story linked to the item you are asking about, i.e. hand prints,” wrote Hajdu. “The Catholic Church in Slovakia has not formulated any opinion on this story.”