The exhibition of human bodies delivered by the Chinese police, which is to take place in Bratislava’s Incheba complex, is drawing protests from various groups even before its opening. 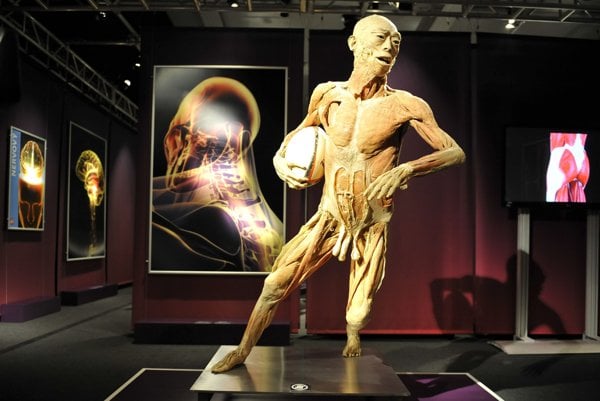 The exhibition has been criticised by doctors’ associations in Slovakia and in the Czech Republic, where the exhibition started in February. The Slovak Institute of Medical Ethics, for example, issued a statement claiming that the Human Bodies exhibition violates the law and called state authorities to take action. Head of the Czech Medical Chamber, Milan Kubek, says that the exhibition is a defamation of corpses. The anatomy of the human body can be exhibited also as plastic models, he opines, as quoted by the Sme daily.

A Chinese man by the name of Huang Wanqinq recently submitted a criminal lawsuit against the exhibition, claiming his brother’s body is in it, Sme wrote on August 5. The exhibition’s organiser, the JVS Group, is keeping silent about the origin of the bodies, though it is possible that they belong to the dissidents-critics of the Chinese communist regime, who did not approve for their bodies to be posthumously exhibited.

The exhibition, which already was exhibited once in Incheba, is unethical and unlawful, the extra-parliamentary Christian Democratic Movement (KDH), claims as cited by the TASR newswire. They are also calling for it to be banned, KDH spokesman Stano Župa said on August 6. KDH will also call on the government and MPs to adopt a ban on using mummified human bodies for commercial purposes.

Slovak doctors and the Slovak Bishops Conference (KBS) have also taken up a critical stance against the exhibition, KDH claim.

“The exhibition human bodies is unethical and morbid,” Župa said. “We can invoke the defamation of corpses when they are treated like this. The dead human bodies displayed at the human body exhibition are the real bodies of people; people who were once alive, who had families, their own life stories. We don’t know who these people are. We have no idea whether they wanted to become exhibits.”

The Christian Democrats indicated not only the ethical aspect but the legal one, claiming that the exhibition is unlawful. “This exhibition is illegal. According to currently valid legislation, a human body should be buried within 96 hours of death, but no sooner than within 24 hours of death,” KDH stated.

Parliament should adopt an amendment to the burial law that would explicitly stipulate that mummified human bodies cannot be used for commercial purposes, the movement also added.

Erika Jurinová and Anna Verešová, MPs for the opposition movement OĽaNO, from the Minorities and Human Rights Committee of the Slovak Parliament, condemn the upcoming exhibition. The exhibition violates basic human rights and pushes the boundaries of moral standards, they said, as quoted by the SITA newswire. “Today, at a time of modern technologies and 3D printers, we can get faithful and detailed replicas of the human body, without the misuse of dead human bodies. The commercial presentation of a dead human body grossly violates basic human rights and human dignity. In France, Israel, and many US states, they have banned similar exhibitions,” they said in a statement. The MPs share the view of experts from the Faculty of Medicine of Comenius University and the Slovak Medical University.

This human body exhibition was first held in Slovakia in 2012, when it caused critical reactions, not only among conservative politicians. The next exhibition of this kind, entitled Bodies: The Exhibition, is set to open August 24 and last till November 25.