Ultimately, the coalition did not meet, as Prime Minister Robert Fico was allegedly ill with fever.

The leaders of the ruling coalition parties will meet on August 15 at 17:00 19:00, the SITA newswire wrote.

One day before the scrapped coalition council talks, however, Fico seemed fit and held a public speech, alongside Defence Minister Peter Gajdoš (SNS nominee) on European solutions for purchasing military equipment, according to Sme.

SNS first vice-chairman Jaroslav Paška wished Fico a fast recovery “so that he’ll be in good enough shape to carry on”, as cited by TASR newswire. He also added that the parties have until September 1 to discuss an addendum to the coalition agreement. “We’ll wait,” he said. The addendum is intended to amend the coalition’s inner workings, he explained, adding that SNS holds firm to its demands. 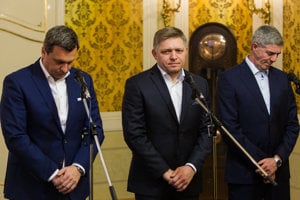 SNS is facing a backlash over the controversial allocations of EU-funds towards research by the Education Ministry, headed by its nominee Peter Plavčan. The party has said that the coalition’s predicament stems from Smer’s failure to abide by the coalition agreement, however. To add insult to injury, SNS believes that Smer has co-opted the opposition OĽaNO-NOVA party and that the two are working in close liaison in an effort to blacken SNS. Fico’s advisor Erik Tomáš, singled out by SNS as responsible for efforts to harm the party, has shaken off the allegations, calling them “absurd”, according to TASR.

Also the chairman of another coalition party, Béla Bugár, seems to have a health issue – he is suffering from inter-vertebral disc pain. Danko has been caught visiting a medical facility, too: he has pain in his arm, for which he gets radiation treatment, the Plus Jeden Deň daily wrote on August 12.

Political analyst Tomáš Koziak opined, as quoted by the Nový Čas daily, that Danko’s ego and ambitions are bigger than his real political power and abilities, and it may break him in the end. “He joined a high-risk game he doesn’t have cards good enough to play,” Koziak says, “and he is bluffing ill-advisedly.” Nový Čas also wrote that ultimately, Danko may be forced to sacrifice

Unofficial talks may take place in the coalition until the next meeting.