It would be artificial to look for differences

Carmakers are aware they are being closely watched after Dieselgate, says German Ambassador Joachim Bleicker. 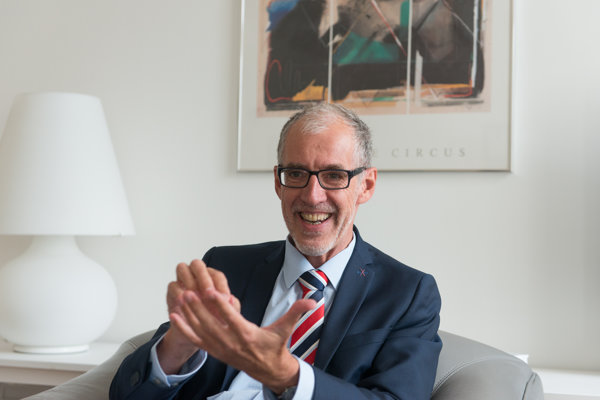 The Slovak Spectator spoke to the ambassador also about the labour shortage and how the German investors in Slovakia are responding to it, as well as the migration crisis and how we can prepare if an emergency situation arises again.

The Slovak Spectator (TSS): What is the vision of the EU for the future amongst Germans, and how do you view the role of smaller countries like Slovakia?
Joachim Bleicker (JB): For Germans, the EU is our present and future. In order to serve us all, we must make it weather-proof and able to cope with the challenges of globalisation and preserving our European model of a socially oriented market economy and standard of living. Prime Minister Robert Fico is absolutely right when he says Slovakia wants to be in the core. In fact, it is in the core. If you look at the level of integration, you’ll see that Slovakia is already there. So the question is more if Slovakia will remain in the core. We think it is a very valuable partner and very much needed in shaping the core further.

TSS: Foreign ministers Miroslav Lajčák and Sigmar Gabriel have recently signed a memorandum on cooperation between our two countries. Why is this deal important and how can it benefit the countries?
JB: It will certainly give new impulses and structure to our cooperation which is already very rich and very good. Both our countries think it would be useful to structure it even better. This new initiative goes back to a proposal PM Fico made when he was in Berlin at the beginning of April on the occasion of the 25th anniversary of the Treaty of Good Neighbourhood between the former Czechoslovakia and Germany. I was present at the meeting and I saw him make the proposal, as well as the favourable reaction of our chancellor. So now the foreign ministers took it up. As a next step, we intend to prepare an action plan to really connect all the different ideas and initiatives. Hopefully we will sign it next year at the occasion of 25 years of German-Slovak diplomatic relations.

TSS: What are, in your opinion, the most outstanding issues that should be part of the action plan?