Among the hits were the artificial Moon, and the installation in Freedom Square/ Námestie Slobody. 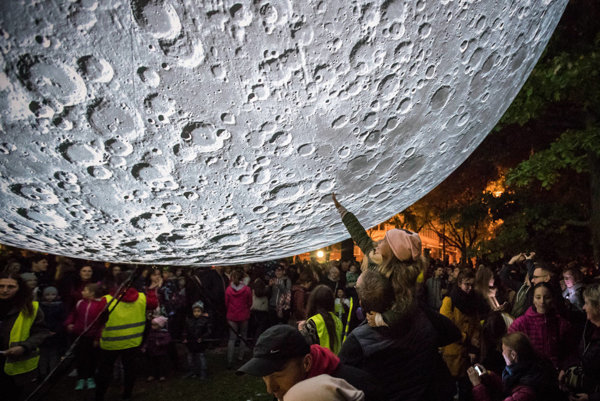 Volunteers had to defend the biggest hit of the third year of the White Night event in Bratislava on October 7, the textile replica of the Moon placed in the Medická Záhrada garden in the downtown capital.

Visitors, estimated at 200,000 for the evening, were fascinated by the replica, a 1:500,000 miniature of the real Moon, put together from very detailed NASA pictures. The artwork by Briton Luke Jerram was called the Museum of the Moon and created a people-jam at the gates of Medická Záhrada, the Sme daily wrote.

Other hits from the event in Bratislava bringing visual art to public spaces were the installation by Collectif Coin in Freedom Square/Námestie Slobody and the installation at Slovak Radio’s Pyramid Building. The former reminded Bratislava inhabitants and visitors alike how impressive the fountain and square used to be once, and how dilapidated it is now. 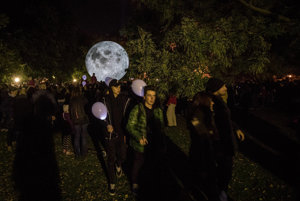 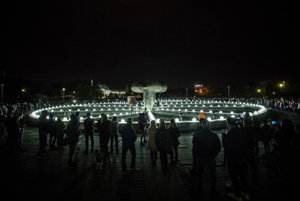 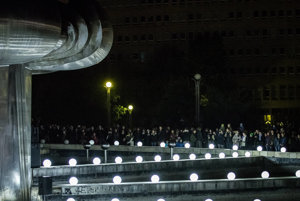 The crowds created a bottleneck in the narrow streets of historical Bratislava, which was awesome and annoying at the same time. Many people drove their cars into the centre, which caused huge traffic jams and hours-long delays in mass public transport.

Technical issues, including a two-hour delay in the Old Market Hall (by Dökk – meaning Dark in Icelandic Performance by the Fuse Company), angered some visitors.

As it was clearly impossible to see the 70-plus events during the seven hours on Saturday (not to mention the crowds), it may make sense to spread the event throughout an entire weekend next year, Sme suggested.

Overall, the White Night in the Slovak capital managed, apart from attracting thousands, to draw attention to public spaces, to sites sometimes unnoticed and sometimes even seemingly forgotten.