Slovaks are the friendliest people in the V4 region

The Visegrad Group countries share their fear of refugees and criticism of their treatment by western European countries. 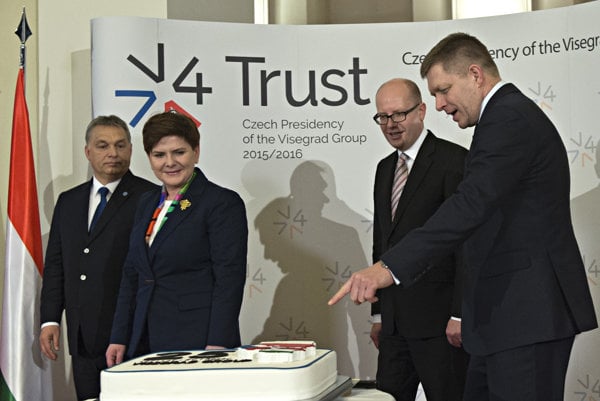 Slovaks are the friendliest nation in the Visegrad Group (V4) region. They like their neighbours although the Hungarians, Poles and Czechs do not reciprocate the feeling.

This comes from a poll carried out by the Hungarian institute Nézőpont Intézet between June 29 and July 15 on 1,000 respondents, focusing on popularity and expectations within the V4 nations, the Trend weekly reported on its website.

The poll showed that the favourite V4 citizens are the Czechs, chosen by 77 percent of all inhabitants of the group. Second came the Slovaks and the Poles selected by 68 percent of respondents. The least popular are the Hungarians with 62 percent.

The relations within the group, however, seem to be very good as every nation was selected by more than 50 percent of the respondents.

“Slovaks gave the best evaluation of their neighbours,” Nézőpont Intézet said, as quoted by Trend.

More than 70 percent of Slovak respondents claimed that they like their V4 neighbours. Ninety percent picked the Czechs, 75 percent the Poles and 72 percent the Hungarians.

The feelings from their neighbours, however, are not as cordial.

Though the Czechs claimed they like the Slovaks the most, only 73 percent of them chose this option. At the same time, as many as 21 percent of Czechs said that the Slovaks are their least popular neighbours, which is the worst evaluation within the V4. This was mostly affected by the Slovak minority that lives and studies in the country. Some Czechs believe that Slovaks deprive them of jobs and places at universities, Trend reported.

Regarding the negative evaluation, 14 percent of Slovaks picked the Hungarians as their least favourite neighbours, while 15 percent of Hungarians selected the Slovaks.

The poll also suggested that more than 50 percent of respondents think that cooperation within the V4 is very important and that the group should pursue united economic and political interests.

Moreover, up to three-quarters of respondents claimed that western European countries do not treat them as equal partners. This feeling is most visible in Slovakia (79 percent of respondents).

Slovaks, Hungarians, Poles and Czechs also support closer cooperation within the group. It should focus on areas that bother the inhabitants the most, particularly the better protection of outer EU borders. One of the reasons for this is their shared fear of migrants, according to Trend.

This is why the V4 inhabitants support the Hungarian plan to build a border fence and disagree with the redistribution quotas. As many as 65 percent of respondents were against the idea of giving up their national currency, although the majority of Slovaks claimed they are satisfied with the euro.

Another area of cooperation is the harmonisation of industrial policy and the construction of highways.

Paradoxically, the areas supported by the Visegrad Fund, such as the common cultural events and the connection of scientific research and university education, ended up at the bottom of the list, Trend reported.