Walking in the sky in Bratislava 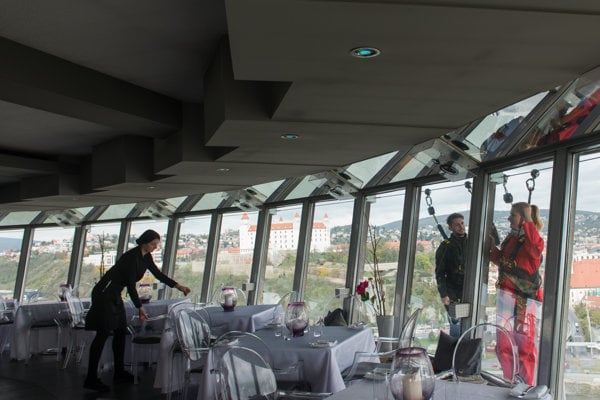 Bratislava will soon have a new adrenaline attraction. The Skywalk will be a walk on the 70-cm wide window board around the UFO restaurant on the SNP Bridge. The technology is already installed and the pre-sale of tickets will start later this year. The attraction itself will be officially launched in April. The price of a Skywalk ticket has not yet been revealed.

Bratislava will be the only city in Europe offering such an attraction apart from Tallin, Estonia. On a clear day, those courageous enough to take the Skywalk will be able to see as far as 100 kilometres and enjoy a 360-degree vista encompassing three neighbouring countries – Slovakia, Austria and Hungary. 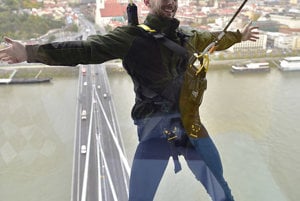 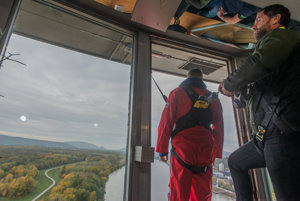 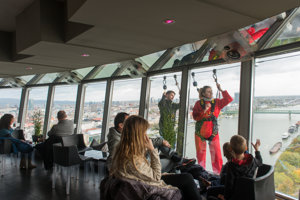 Before taking the Skywalk, the walkers will get special red overalls. They will be attached to a one-cm thick steel rope mounted to the outer side of the UFO restaurant with two safeguarding systems. Accompanied by a professional guide, they will walk around the UFO restaurant from the outer side, explained Henrich Bartovič, the creator of the project. At three check-points the walkers can try to lean over the edge of the board that is 82 metres above the ground or sit down on it. One walk will last approximately 15 minutes so that there is time to take pictures of the person doing it.

The limits set for access will be weight, the maximum weight allowed will be 130 kg, as well as height, up to 2 metres. Children will be allowed to participate but only those 140 cm or taller. It will be within the power of the guides to refuse to take a client on the Skywalk if they have the suspicion that a client is drunk, for example.

The Skywalk is part of the Adrenaline Bratislava project. In addition, there will be an aircable enabling people to get directly down from the UFO restaurant to the UFO beach. It will be put into operation in the summer.

Adrenaline Bratislava is costing €40,000 and was co-financed from the subsidy scheme of Bratislava Region Tourism. It contributed more than €17,000.