In the Czech Republic, cheap formulas work well while nationalism appeals to the Polish and falsified history to the Hungarians. 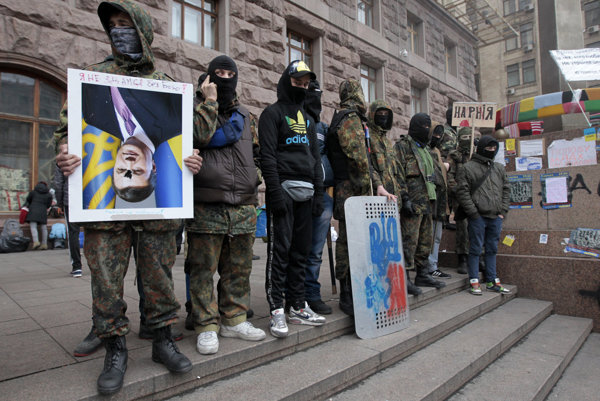 The Maidan protests in Ukraine and ensuing events launched the boom of disinformation in Slovakia. (Source: AP/TASR)
Font size:A-|A+60

Regional specifics of the information war

◾How propaganda in Slovakia avoids media but enters politics.

◾Where you can read that the Hungarian language is the foundation of all languages and that Jesus was a Hungarian.

◾What is Gutenberg's moment.

This story was written in partnership with the Sme daily and the Czech Centre for Investigative Journalism. The project was supported by the Open Society Fund Prague foundation.

Russian propaganda is getting stronger according to a detailed analysis of the so-called alternative websites in the Visegrad Group countries (the Czech Republic, Poland, Slovakia and Hungary). We scrutinised the contents, collected, compared and analysed metadata, and studied semantics. The result is clear. Russian propaganda has gradually occupied positions in the internet space since then-Ukrainian president Viktor Janukovych refused to sign the association agreement with the European Union and the so-called Euro-Maidan protests began.

“And since that moment, it has been strengthening, at least acccording to our preliminary research of several million stories in Czech, English and German languages,“ says František Vrabel of the Semantic Visions company, which deals in the long-term with internet media and their stories, from the point of view of a huge volume of data and semantic analysis.

All the so-called fake-news or "alternative" websites have a common structure of their content matrix that can be divided, in a very simplified way, into four main issues: geopolitics, environment, health and diet/food. Anything and everything can fall under these four categories including click-bait stories, advice on how to lose 15 kilograms in five days, and information on chemtrail theories and the Russian salvation of Syria. The percentage ratio of individual issues differs according to the country and language in which the web content appears.

In Slovakia, the disinformation scene was active during the conflict in Ukraine, and later the migration crisis. Stories on immigrants turned out to be the most explosive and attractive for readers. The association of independent media was established, in which several active conspiracy websites are united. They may have drawn inspiration from the Czech Republic where in June 2014, the so-called alternative media founded the Association of Independent Media. The domain was registered by Ondřej Geršl, operator of the AC24 website.

The production of these websites does not penetrate the classical newscast, but rather the politics. Popular Slovak MP Boris Kollár is known, for example, for publishing hoaxes from the alternative scene. Politicians of the ĽSNS party of Marian Kotleba get a generous space in media outlets like Slobodný Vysielač (Free Broadcaster). A high correlation between the readers of alternative media and voters of populist and extremist parties like Sme Rodina (of Boris Kollár) or ĽSNS has been confirmed by opinion polls and analyses of Facebook likes.

Specific evidence on financing from or connection to Russia does not exist. One exception is the recording from the Russian embassy, in which Tibor Rostás of the Zem a Vek website asks then-Russian ambassador Kuznetsev for cooperation and support.

Unlike Polish and Hungarian nationalism, in the Czech Republic, propaganda tries to lure readers in a completely different way. The Czech population is not prone to evoking love towards one's homeland but rather to cheap recipes, tricks for losing weight and old wives' advice for healing cancer. Thus, apart from news concerning what the European Union (EU) wants to ban and how non-governmental organisations smuggle migrants, stories on how to get rid of haemorrhoids appear more popular The alleged harmfulness of vaccinations and global warming are also frequently discussed.

This is most visible on websites that do not have the main goal of spreading propaganda and fake news. These websites serve as a bridge between the traditional media and "alternative" websites like instory.cz, a website many people have come across in the past six months through their browser when typing entries like "drying mushrooms" or "how to boost growth of a moustache“.

In the Czech Republic, pan-Slavism is more appealing to readers than nationalism itself. Readers connect with the Slavonic intercommunity when they are told that non-Slavonic nations want to enslave them and that the EU is a mere tool of the Germans who want to dominate the Slavic nations again. This pan-Slavism trend has also been confirmed by the Security Information Service in its 2015 annual report which exposes the main goals of Russian information operating in the Czech space. They are as follows: