Alexandra Borbély, who won a “European Oscar”, left the country, which turned out to be the right decision. 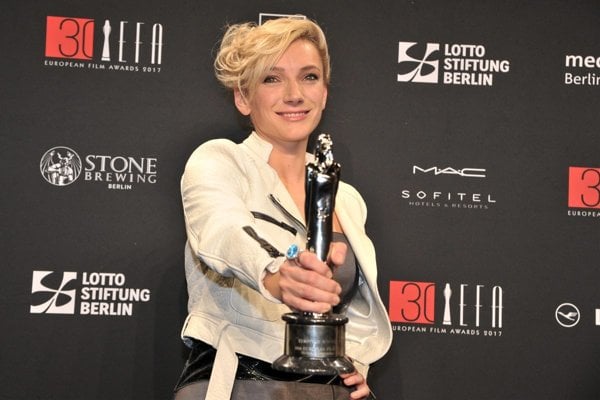 Alexandra Borbély comes from Veľký Cetín, a village near Nitra. There, she dreamed of being an actress and studying at the Academy of Performing Arts (VŠMÚ) in Bratislava. She applied, passed two rounds of entrance tests – and then did not come back to Bratislava. Instead, she moved to Budapest.

At that moment, Slovak film and theatre lost a great talent but for Alexandra Borbély, it was the right decision. World-class cinematography is currently being made in Hungary, while the Slovak industry lags indisputably behind.

Hungarian director Ildikó Enyedi noticed Alexandra. Despite her personality not corresponding with the role at all, Enyedi assigned Borbély for the main role in the film On Body and Soul, which became one of the best European films of the year. First, it was hailed at the prestigious festival Berlinale where it got the main prize; now, it ended the season with an even bigger award.

The young actress told Sme that she had to suppress all her sex-appeal to play On Body and Soul. The movie tells the story of a food inspector, stubbornly honesty, who comes to check the quality of meat at a huge slaughterhouse. Its economic manager watches her worriedly and wants to talk her out of ruining a good business because of details but he is inexperienced and helpless in communicating with women – his intimate relationships have always failed.

Despite his bluntness and her autistic inclinations, they ultimately become close.

On Body and Soul is a tender and at the same time amusing romance of two vulnerable people, of creatures who need to protect themselves against the outer world.

Although the film takes place at a slaughterhouse, the cinematography is beautiful, including the sophisticated dream scenes. It is unique on the film scene. The seriousness of the motif contrasts with the light tone of the movie; thus, audience may be surprised when Alexandra grasps a sharp tool and is about to cut herself.

The actress says that during one screening in Budapest, a woman in the audience fainted. When she went to console her in the end of the film, the woman almost fainted again.

Further prospects of the movie...

On Body and Soul, distributed by the Film Europe company, can still be seen in cinemas (in Hunagrian, with Slovak subtitles in Slovakia).

The European Film Academy pronounced the movie The Square the best European movie. The prize for the best director and script-writer went, deservedly, to Ruben Östlund, and the best actor is Claes Bang, for the main role in this film which got the Golden Palm and which is recommended to be seen as well. Together with the Hungarian movie featuring Alexandra Borbély, they will be big favourites for the Oscar in the Best Foreign Film category. According to the updated reports, the American Film Academy put On Body and Soul on its shortlist for Oscars – unlike the Slovak movie The Line.

Thank you for singing up. Shortly an email will be sent to the address you provided to verify your e-mail.
Error! Please try to register again later, your e-mail was not registered.
Your email is not in a correct format.
Please confirm you are not a robot.
Share on Facebook (69)