The low-cost airline Ryanair is continuing to change its cabin bag policy. As of Monday, January 15th, only priority boarding customers will be allowed to bring two carry-on bags on the aircraft.

“This new policy is fair, will speed up boarding and will eliminate any risk of Ryanair flights being delayed because of too many bags being brought on board,” said Ryanair’s Kenny Jacobs as cited in the airline’s press release. 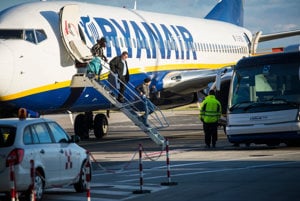 The airline informs that customers can still enjoy the two free bag allowance, but from January 15 only priority boarding customers will be allowed to bring two carry-on bags into the cabin of the aircraft. All other customers can bring one smaller carry-on bag on board, while their second, bigger, wheelie bag will be placed in the hold, free of charge, at the boarding gate.

Jacobs recalled that Ryanair has already cut its checked-in bag fee and increased the checked-bag size allowance. The check-in bag allowance has increased from 15 kg to 20 kg for all bags and the standard check-in bag fee has been cut from €/£35 to €/£25 for standard luggage of up to 20 kg.