A Slovak prisoner tattooed in Auschwitz, remained silent until he grew very old

Lale Sokolov fell in love in the concentration camp; only those close to him knew his story. 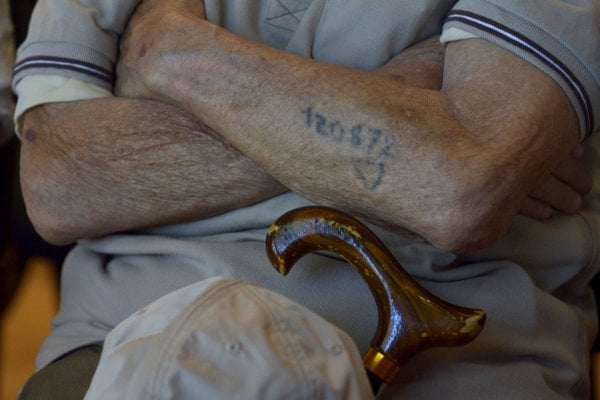 He spoke foreign languages, was a skilled trader – and maybe this is what saved his life. Ludwig “Lale” Eisenberg grew up in a Jewish family in the eastern-Slovak town of Krompachy but by the time World War II started, he was managing a department store in Bratislava.

It was there that he learned about the plan to deport all the Jews from his hometown. So he returned to Krompachy and offered himself to the authorities as young and able to work, in order to save his ageing parents from deportation. According to an obituary in the Guardian, he was never to see them again.

Lale Sokolov, a name he later adopted, did not talk about his experience of the Nazi concentration camp at Auschwitz for more than 50 years. He feared that he would be perceived as a collaborator and a traitor. Now, 11 years after his death, a book describing his fate by Heather Morris, called The Tattooist of Auschwitz, was published recently in Australia.

"This man, a tattooist at the most infamous concentration camp, guarded his secret in the mistaken belief that he had something to hide,” said Heather Morris, who spent three years recording Lale’s story before he died in 2006, in conversation with the BBC. It was not easy to win his trust - Lale thought it would protect his family if he kept silent.

You don’t have names, just a number

Lale arrived in Auschwitz aged 26, in one of the first transports and was immediately tattooed on his forearm with the number 32407. All prisoners arriving between autumn 1941 and spring 1943 underwent such registration and those who had numbers might consider themselves lucky, as the others were sent straight to the gas chambers.

This was just one in a series of humiliating and dehumanising things that happened on the arrival to a camp, Piotr Setkiewicz, head of the Auschwitz Museum research Centre, said for the BBC about the process of tattooing. It was painful and people understood that in that moment, they had lost their names. From then on, prisoners did not officially use their names, they had to use numbers, he adds.

“One day, Tätovierer (Tattooist), I will take you – one day.”

Josef Mengele, the doctor from Auschwitz

Lale later became the person to tattoo these numbers on other prisoners’ forearms for more than two years. He was given this work after he contracted typhoid, was addressed by the man who tattooed him, a French academic named Pepan, and became his apprentice and assistant. After Pepan “disappeared”, Lale took over his position, possibly also thanks to him speaking several languages.

This work helped him not only to survive but unlike other prisoners, he also had certain privileges – he slept in a separate room, ate in an administrative building and even had some free time.

This did not mean however that he did not fear for his life. The infamously brutal doctor, Josef Mengele, used to select patients for his experiments from the transports and they came to Lale. One day, Mengele started terrorising Lale loudly: “One day, Tätovierer (Tattooist), I will take you – one day,” he said, according to Morris’ book.

Love in the camp

In her book, Morris also describes the fateful love story of Lale and Gisela (Gita) Fuhrmann. Lale tattooed the number 34902 on her forearm but he was attracted to the young girl and despite the harsh regime, he kept in contact with her.

“As I tattooed her number on her left arm, she tattooed her number in my heart,” Lale told the writer. The letters got to her thanks to his personal guard, an SS member. The tattooist tried to help her with extra rations of food, as he did for other prisoners.

When the Russians came close to the camp in 1945, Gita and many other prisoners had to leave, together with the Nazi soldiers.

Lale was first moved to the Mauthausen camp but he managed to swim across the Danube and return to Slovakia. After the war, the Auschwitz Tattooist did not know whether he would ever see his love again or whether she was still alive, for that matter.

He left Krompachy for Bratislava in a horse-driven carriage, where he waited for Gita for weeks at the train station. The trains brought back survivors from the transports. He was sent to look for her at the Red Cross headquarters, and on the way there, she suddenly appeared in front of his carriage.

They fled as far as possible

In October 1945, they married and started a textile business, saving and collecting money to support the new state of Israel. However, that combined with the change of regime to a communist government which nationalised their business, meant Lale ended up in prison.

When he received a weekend permit to leave, he fled from Czechoslovakia with his wife; first to Vienna, then to Paris and eventually they ended up in Australia. In 1961, their only son, Gary, was born there. Lale only started to talk about his extraordinary experiences after Gita died in 2003.

The research into the documentation for the book helped to uncover the fact that Lale’s parents had died in Auschwitz one month before he arrived. However, Lale died in 2006 before he could learn about this.

When the writer asked him how it was possible that he was so positive even in the darkest moments, he answered, according to the Guardian, “If you woke up and were alive, it was a good day.”