The artist’s identity remains a secret along with the church or monastery for which the painting was originally intended. 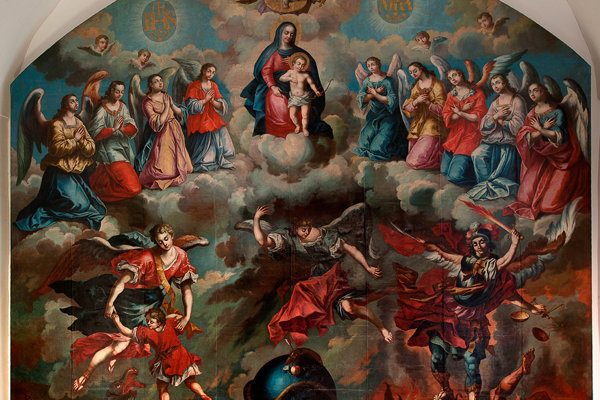 Since mid-December, the Franciscan church in Bratislava has been the new home of the latest pride of the Bratislava City Gallery – the restored monumental painting The Queen of Angels.

“It is a top-of-the-art work from the late Baroque period,” said Ivan Jančár, director of the Bratislava City Gallery (GMB) during the ceremonial presentation of the restored painting.

This oil on canvas is almost 30 square meters and dates back to 1730-1740. It is not a work by one master but, as used to be the practice at that time, an entire art workshop. Nevertheless, which church or monastery the painting was created for remains an open question.

The iconography of the painting is outstanding. It is multi-layered and combines several themes.

At the centre of the upper third, the Virgin Mary with Jesus in her arms is perched on a cloud. Jesus is holding a bow with an arrow aimed at the devil in the form of a snake. Over them is the half-figure of God the Father with a dove symbolising the Holy Spirit extending a blessing. Alongside the Madonna, nine angels are kneeling, four on her right and five on her left. They represent the nine angelic choirs such as the cherubs, seraphs and others.

In the lower half there are three large figures depicting archangels.

“On the far left is the figure of the Archangel Rafael, who accompanies, and is therefore the patron of pilgrims and travellers,” said Brother Jozef Čirák, superior of the monastery of the Order of Friars Minor, commonly known as the Franciscans, in Bratislava. “In the centre is the Archangel Gabriel, whose attribute is the word, as he announced to the Virgin Mary that she would conceive and become the mother of Jesus, the Son of God. On the far right is the most dominant figure, the Archangel Michael, who is a warrior against evil and wins over it in this painting.”

The iconography suggests that the commissioner of this painting, as well as the destination, was a church or monastery dedicated to the Queen of Angels or an order for which Marian worship was a substantial part of their spirituality. More has not been deciphered yet.

As the “angelic” theme dominated the painting, the gallery has changed its name to the Queen of Angels, Regina Angelorum in Latin, from the original, more complicated, name – Virgin Mary as the Guardian of the Fallen and the Dead.

Baroque painting of the Queen of Angels

When the picture can be seen:

-upon request at the entrance of the monastery (from Františkánske Square, next to the Franciscan church)

Experts have so far only found partial analogies from the Italian environment. Sebastien Ricci’s painting (1659-1734) revealed an almost identical depiction of the Archangel Rafael. At that time, it was common for artists to work with widely spread art prints. They were either freely inspired by them, or incorporated individual figures or whole scenes from these prints into their paintings.

“In terms of artistic and historical research, we have more questions than answers,” said Jana Luková, GMB curator. “We hope that exhibiting the painting will stimulate further research and we will soon receive answers to our questions.”

A long road to restoration

Luková came across the painting in 2009. It was lying on a shelf in the depository of the GMB in Devínska Nová Ves, rolled up like a carpet and in very bad condition.

“I would never have imagined that one day it would be so nicely restored and presented to the public,” said Luková during the opening on December 12, 2017.