Investigation of the murder of Jan Kuciak continues, tens of thousands demonstrated around Slovakia and beyond on Friday.

After 48 hours since their detention, the Slovak police released all seven people detained during the Thursday raid in eastern Slovakia.

"During the legal timeframe - 48 hours - police checked and searched for facts needed for an indictment," Reuters quoted police spokesperson Denisa Baloghová as saying. "After the 48 hours passed, the persons were released from detention."

The Special Prosecutor's Office declined to comment on the investigation of the murder of investigative reporter Jan Kuciak and his fiancee Martina Kusnirova.

The police did not provide more details about the case. 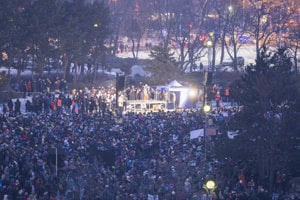