Unique bank of love in Slovakia

The bank of love caught the attention of the BBC. 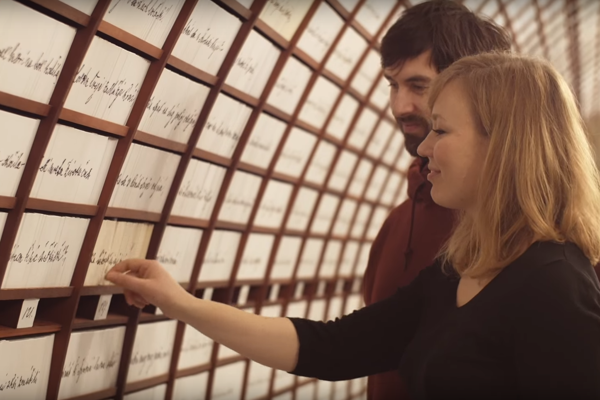 One building in Banská Štiavnica harbours a safe for love inside, the Love Epicentre. Its main attraction is the unique Archive of Love, created from the 2,900 verses of the Marína poem.

The poem Marína was written in 1846 by Andrej Sládkovič to his love Marína, a love that wasn’t destined to be. The poem is 2,900 verses long and it is officially recognized as the longest love poem in the world, Dobré Noviny wrote.

“We are really happy that we succeeded in enlisting it as a world record in the World Record Academy in April 2017 ,” said Katarína Javorská from the non-profit organization Marína and Sládkovič for Dobré Noviny.

The main topic of the poem is not only Sládkovič’s love for Marína, but also his love for Slovakia and for life in general, Dobré Noviny reported.

Almost 100,000 love deposit boxes have been created for visitors from the poem. Each love safe represents one letter, sign or space of the longest love poem in the world. The archive of love is ready to keep and protect more than 100,000 stories of love. It will become the place with the most dense concentration of love in the world – the Love Epicentre - when it is full, Dobré Noviny wrote.

“Couples may keep their love by leaving photos, love letters, rings or tickets to the cinema from the first meeting in the ‘bank of love’. It is safe; messages are protected by a special signet. Only its owners know what is inside,” said Katarína Javorská for the BBC.

Story of Marína and Sládkovič

Andrej Sládkovič was born in 1820, as Andrej Braxatoris. He was from poor family and had to interrupt his studies several times to make money for it. During one such break, his friend recommended him for the position of teacher in one of the richest families in Banská Štiavnica, the Pischl family, Dobré Noviny reported.

While teaching for the family he met Marína and they fell in love. The gap between their property and origin, however, was an obstacle. Marína’s family pushed her into marrying someone else while Sládkovič was hundreds of kilometres away, studying in Bratislava. Marína wrote him a letter that she was being forced to marry someone else; Sládkovič responded that if she would be happy, he wouldn’t stay in her way. But if she could wait, he would be faithful to her, Dobré Noviny wrote.

Marína’s family insisted on her marrying a rich man, Juraj Gerzsö. The wedding took place in 1845; Marína was 25 years old. As 25 was an advanced age for getting married at the time, it may indicate that she waited as long as she could, Dobré Noviny reported.

The love between Marína a Sládkovič was not brought to fruition, however, its message still lives thanks to the opening of the Love Epicentre located in Marína’s house in Banská Štiavnica, Dobré Noviny wrote.

“Many people visit Italian Verona because of the fictional story of Romeo and Juliet. The Slovak story of Marína and Sládkovič is real. We believe that Marína’s house in Banská Štiavnica may soon become the same kind of attraction like Juliet’s balcony in Verona,” said the founder of Love Epicentre Ján Majsniar, as quoted by Dobré Noviny.