What prominent guests has the Carlton hotel hosted? 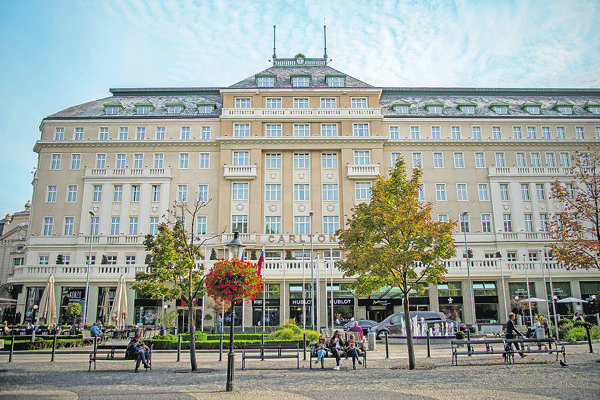 The Hotel Carlton, whose history dates back as far as the 13th century, dominates Hviezdoslavo Square in Bratislava with its majestic façade. To this day it is one of the most prominent hotels in the Slovak capital, the visits of famous figures adding to its prestige.

“In terms of visits this hotel belongs among the most important hotels in central Europe,” said Ján Vyhnánek from the Bratislavské Rožky civic association dedicated to promoting Bratislava’s history, during his lecture on prominent guests of the Carlton Hotel.

Vyhnánek, searching the archives for information about Bratislava history, has been making notes on who was accommodated where in Bratislava. The list of the Carlton’s guests is long, with many prominent names making this place even more interesting.

The history of the Carlton hotel dates to the 13th century, when the “At the Swan” Inn stood in its place. Later in 1760, the roadside “At the Three Green Trees” Inn was established, providing its guests with both lodging and stables for horses. Johann Löwy, the director of the first Hungarian railway between Bratislava and Trnava, bought the building in 1838 and had it rebuilt. From 1844 through 1846, the original single-storey structure was turned into the modern “At the Green Tree” three-storey hotel.

In 1857, the “At the Green Tree” hotel was taken over by the renowned wine merchant, Jakub Palugyay, who had already owned the hotel café. The Palugyay family managed the hotel until the owner’s death in 1912.

The competitor of the “At the Green Tree” hotel was the next-door “National” hotel, situated on Mostová Street. The National was founded by the Speneder family in 1860, later rebuilt into a pompous corner building with its facade facing Mostová Street and Hviezdoslavovo Square, the famous “Savoy” café located on the ground floor.

In 1908, the former manager of the Savoy in London, Heinrich Prüger, purchased the National hotel. In the following years, he acquired the adjacent Gervay House and, after the death of Karol Palugyay, the “At the Green Tree” hotel as well. Prüger had the three hotels rebuilt into the imposing Savoy-Carlton hotel complex, which opened in June 1913. The complex received a unifying façade during its reconstruction between 1925 and 1929.

“Franz Liszt had many friends in then Pressburg, but he always stayed in At the Green Tree hotel, one of the predecessors of today’s Carlton,” said Vyhnánek, adding that Liszt visited the city repeatedly either to give concerts or attend the ceremonial premieres of his works.