Ten dead – but it could have been worse

Monday’s attack in Toronto was not, as many feared, related to religious or political terrorism. 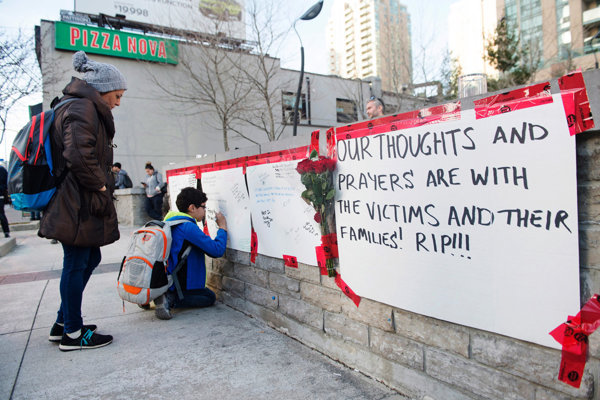 Yonge Street in Toronto was where I first tried, unsuccessfully, to get into a strip club. I was 16, and had amateurishly butchered my driver’s license to make it claim I was 23 (licenses back in those days were paper, and could be altered with razor blades and sticky tape). The enormous bouncer at the door barely looked at my forged document before handing it back to me with dismissive eyes. “Get out of here, kid.”

But Yonge Street was more than just strippers. It housed the old Maple Leaf Gardens, where we went for years as teenagers with heart palpitations to watch NHL hockey. It was home to the Concert Hall, where I saw Tom Waits in 1987. At the foot of the street was Union Station, where we arrived on trains from less sophisticated suburbs to gawk at the sinful city. My brother lived in a filthy apartment on Yonge Street for some months, where an inexplicable shaft above his living room relayed to us the weary discord and passionate reconciliations of the tenants above.

It’s intensely disturbing, now, to know that the same “strip” where we hung out and flirted with sin as teenagers, on Monday became the place where a 25-year-old maniac named Alek Minassian killed 10 pedestrians and injured 16 more by mowing them down in a rented van.