Do you know what “parta” is? 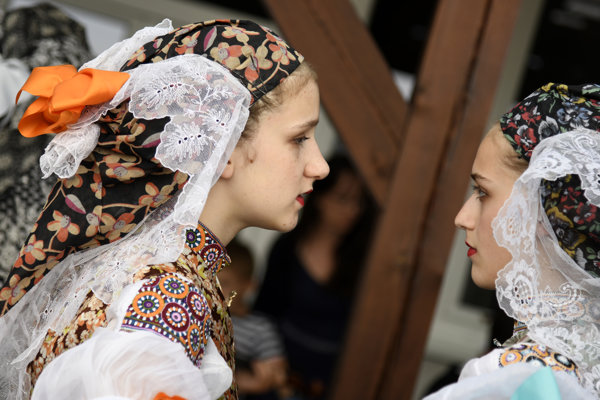 While the world watched the royal wedding in the United Kingdom, Washington experienced some Slovak wedding traditions.

Girls wore headbands, called “parta” in Slovak, during big church feasts or when they got married. However, it gradually fell into oblivion.

The team of young people, composed of ethnologist Katarína Chabrečeková, art painter Sarah I. Avni and photographers Zuzana Sénášiová and Ľubomír Sabo, decided to bring it back to life.

Their aim was to create something interesting and increase the attention of the young generation, TASR reported.

Exhibitions across the world

The team has already organised exhibitions in Slovakia, South Korea, Canada and the United States.

“Everybody is stunned, they did not understand where it came from,” Sabo said, as quoted by TASR. “They have never seen something that is nice, colourful, and handmade.”

The project exhibits not only headbands, but also chaplets in pictures, depicted in modern form in combination with photos, face painting and art painting.

The creation of pictures was preceded by an ethnological survey which was not easy as “partas” are not common anymore and many of them disappeared. Some had to be reconstructed based on pictures and literature. The survey took three years, according to Chabrečeková.

“We created the whole project to show the variability, colourfulness of our regions and villages, and of course the beautiful partas that are our legacy,” Sabo sai, as quoted by TASR.

Apart from partas, six traditional folk costumes and face-painting created by Andrea Ľubocká directly on spot were shown in Washington. The exhibitions took place in three places: during the open day at the Slovak embassy, at the presentation of Slovakia held for invited guests, and at a popular annual competition of chefs from the embassies in Washington.

“Everybody is really amazed and I think they will really remember where Slovakia is, what Slovakia is and what is its history after our exhibition,” Sabo said, as quoted by TASR.

The project will now move to New York, where it will be exhibited in an art gallery in Manhattan for the whole week.

Thank you for singing up. Shortly an email will be sent to the address you provided to verify your e-mail.
Error! Please try to register again later, your e-mail was not registered.
Your email is not in a correct format.
Please confirm you are not a robot.
Share on Facebook (89)