Henry John Serafica Acorda from the Philippines succumbed to his injuries following a street assault. Anti-racsist protest gatherings are planned for Wednesday. 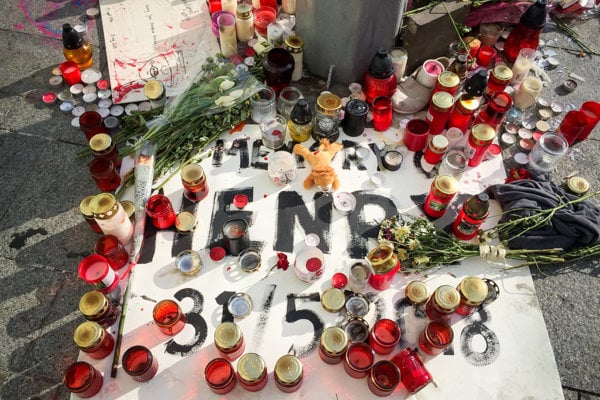 People have lit candles at the place where Henry Acorda was attacked. (Source: Sme)
Font size:A-|A+

On the night of May 26, Henry John Serafica Acorda was assaulted after he tried to intervene when he saw a man harassing women in the street in the centre of Bratislava. Five days later, the Philippine-born expat, who lived and worked in Bratislava, succumbed to the injuries he sustained from his attacker, 28-year-old Juraj H. from Dunajska Streda.

The police have neither confirmed nor denied the attack was racially motivated.

Acorda was 36 years old and had lived in Bratislava, working for the IBM international service centre based in the Slovak capital, for several years. On the night of May 26, he was assaulted by one of two men that he tried to stop from harassing two women in the street. According to media reports, the man, Juraj H., pushed Acorda who then fell onto the pavement becoming unconscious, after which the attacker continued to kick at him, including in the area of his head. Police officers patrolling nearby rushed to the scene of the incident and found Acorda lying on the pavement. He was taken to one of Bratislava's hospital in critical condition. He died in the hospital on May 31.

The police at first detained the attacker but the district prosecutor dealing with the case did not order his detention and Juraj H. was released on May 30.

"The prosecutor studied the case file and did not find any facts regarding the suspect that would raise concerns that he would continue in similar criminal activities," the spokesperson of the Bratislava Regional Prosecutor's Office, Oliver Janicek, told the Sme daily.

After the media reported Acorda's death, the prosecutor requalified the crime and the charge was upgraded from assault with bodily harm to the more serious crime of manslaughter and on June 1 took the attacker back to detention. On June 3, the prosecutor requested that the attacker to be taken into custody out of concern that he might continue his criminal activities or try to escape punishment. The punishment for manslaughter is 7-12 years under the Slovak Penal Code.

The General Prosecutor's Office said that they would oversee the case.

Acorda's family flew to Slovakia after he died. His close friend Jack Tranter, also an expat based in Bratislava, organised a fundraising event through a crowdfunding website and had managed to collect nearly GBP9,000 by the night of June 4.

Expats living in Slovakia have expressed their outrage over the assault. Several black and Asian people have shared their stories through expat groups on Facebook, talking about how they too had experienced assaults in the streets of Bratislava. They believe these to be racist attacks.

A peaceful gathering of a few dozens of people took place in Bratislava on the evening of Friday, June 1, at the place where Acorda was attacked. People lit candles and silently commemorated the victim of the attack.

Two bigger gatherings are planned to take place on Wednesday, June 6 in memory of Acorda, calling for justice to be delivered for him. In Bratislava, the gathering is organised at 6 pm by four anti-fascist communities on Facebook.

"The information that we have about Juraj H. makes it clear that he is inclined to support the far right," they state. "Let's make sure this brutal murder does not go without consequences for him."

A gathering is also planned on the same day in Banska Bystrica at 5 pm, organised by the Not In Our Town initiative.

"Hate and racial hatred that many spread publicly also bears this kind of fruits," the organisers wrote. "Let us say not in our town, not in our country."

Several coalition and opposition politicians have condemned the attack.

PM Peter Pellegrini said in his reaction for the Dennik N daily that he could not tolerate murderers to walk Slovak streets freely. He considers it important that the attacker is condemned and put into prison soon.

"I hope we will not witness a situation where there will be no effective ruling one year from now," Pellegrini stated, adding that justice must be delivered immediately.