Poison that killed birds of prey found in hunter’s house

Someone in the vicinity of the village of Tvrdošovce has killed at least 24 birds of prey this year. 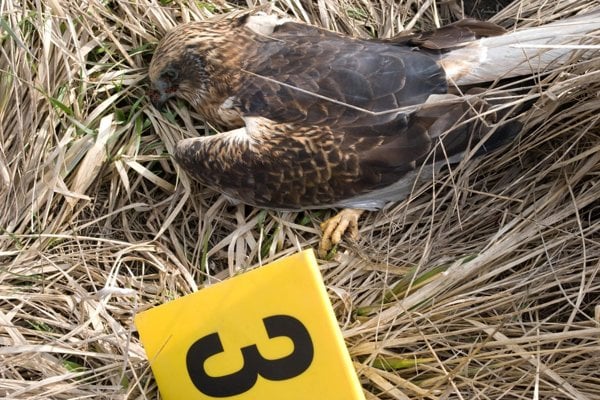 Police found two-and-a-half litres of a chemical substance in the house of a long-time hunter on June 6. The substance will be scrutinised by a forensic expert but preliminary findings suggest that it is carbofuran, the My Nové Zámky regional newspaper reported.

This dangerous poison is prohibited in the European Union but nevertheless, it is used for the targeted killing of predatory animals.

The perpetrators impregnate or smear bait with carbofuran and then leave it in the natural habitat of their future victims.

“Unfortunately, some groups of protected species, including birds of prey, are also included in this target category,” Lucia Deutschová of Rator Protection of Slovakia told the SITA newswire.

Police from Nové Zámky made a house-search in Tvrdošovce in connection with the poisoned birds of prey which were found – mostly in March and April – at several places in the area. Most of the dead birds were found in the vicinity of Tvrdošovce in 2018.

“The statistics of the victims are horrifying: at least 16 common buzzards, six western marsh harriers, two common ravens and also one dog and several foxes were found close to the poisoned lures,” Deutschová summed up the details of the case recorded in the spring in the hunting district of Jánošíkovo II by representatives of State Nature Protection and Raptor Protection of Slovakia after three weeks’ observation.

The protectionists say they found poisoned birds in the fields almost daily.

The police confirmed that they have opened a criminal investigation into the violation of the protection of plants and animals, the crime of unauthorised production and possession of radioactive substances and high-risk chemical and biological substances, the possession of toxins and the misdemeanour of poaching. If convicted, the suspect faces a prison sentence of one to six years, a spokesperson for the Nitra Regional Police, Renáta Čuháková told My Nové Zámky. 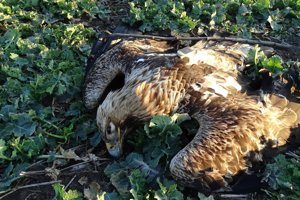 However, no charge against a specific person has been made so far.

“The person whose home was searched by police is only suspected of possessing the dangerous chemical substance carbofuran,” Čuháková said, as quoted by My Nové Zámky, adding that possible charges would be considered only after a chemical analysis has been delivered – but they would only be for possessing a banned chemical substance.

Believing in justice and its victory

The private broadcaster TV Markíza informed that the suspect has long been thought by his colleagues to be killing birds of prey. On the other hand, the head of the hunter’s association in Tvrdošovce, Vincent Birkus, defended him and argues that he fulfilled his duties and was doing a good job. If carbofuran is found at his home, this must have been left over from the time when it was legal, Birkus insisted for TV Markíza.

In 2018, Raptor Protection in Slovakia recorded 30 cases of illegal activities resulting in the killing of 73 protected birds, including the eastern imperial eagle and the white-tailed eagle, My Nové Zámky wrote, adding that the 25 cases involved death by carbofuran – which killed a total of 67 birds, according to Slávka Doktorová of Raptor Protection of Slovakia.

Thus, the protectionists hope this case will set a precedent and that the life of protected species will be given a higher priority than the personal interests of individuals.