The Handmaid’s Tale in parliament

Feminist activists dressed in costumes from the TV series to protest a proposed law banning abortions. 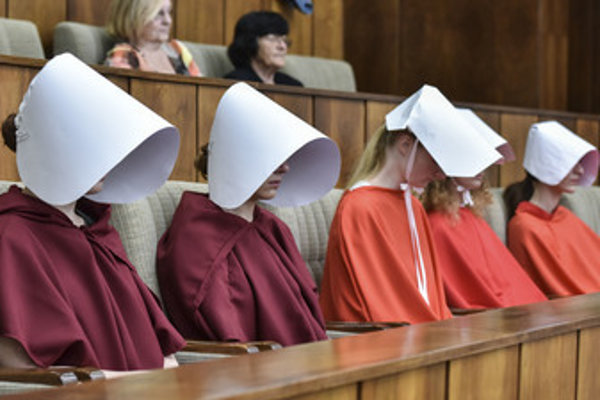 The Slovak parliament voted on the disputed proposal of the far-right ĽSNS party during its June 13 session. According to the opposition parliamentary party, abortions should only be allowed when the life of a pregnant woman is in peril, when a pregnancy was the result of a crime or when a fetus has a demonstrable genetic defect, the TASR newswire wrote.

This proposal reminded some women of the dystopian country Gilead from the US TV series Handmaid’s Tale so they decided to show this to the MPS, the fici.sk website wrote. Before the vote, they arrived to parliament in costumes worn in the series by fertile women forced into sexual and child-bearing servitude due to a demographic crisis. The symbolic protest was organised in cooperation with the extra-parliamentary Progressive Slovakia party, the website wrote, adding that these women have been robbed of all rights, including the right to decide on their own body, thus becoming mere wombs for other families in a totalitarian country suffering from fertility issues.

The series was based on a book by Canadian writer Margaret Atwood.

The bill turned down

At the June 13 parliamentary session, MPs ultimately halted a vote on the bill, as 76 MPs voted for a motion submitted by Smer, proposing not to hold a vote on this bill at all.

Behind this idea are the activists around the feminist.fyi magazine and the Progresívne Slovensko (PS) party.

“We have come today dressed up to the parliamentary lodge despite not believing that this ĽSNS-made draft bill could be passed,” Dana Vitálošová, founder of the online feminist magazine, told the Fičí website. “In this way, we want to show all parliamentary parties which plan to work on their own abortion bans during summer that we will watch them, follow them, and will continue fighting for our reproduction rights.”

“We are sure that the decision on such a sensitive and intimate issue as deciding when to become a mother should remain the responsibility of the woman,” vice-chair of PS, Irena Biháriová. 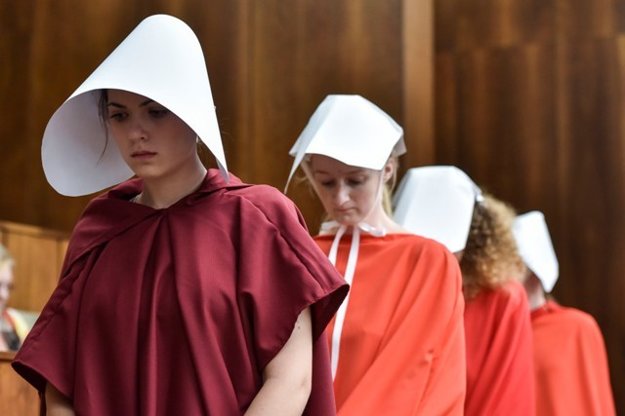 The robes from the series were meant to symbolically illustrate the position of women “who through this law would become only silent witnesses of how the state interferes in their privacy and their family lives”, fici.sk wrote.

Although parliament agreed with 76 votes the bill would not be voted on, some members like the independent MP Richard Vašečka said they will try to elaborate their own draft bill to toughen rules for abortions. Thus, there is a high chance the Handmaid’s Tale in Slovak parliament has not ended yet, Fičí wrote.