It will help with recruiting new employees, including from abroad. 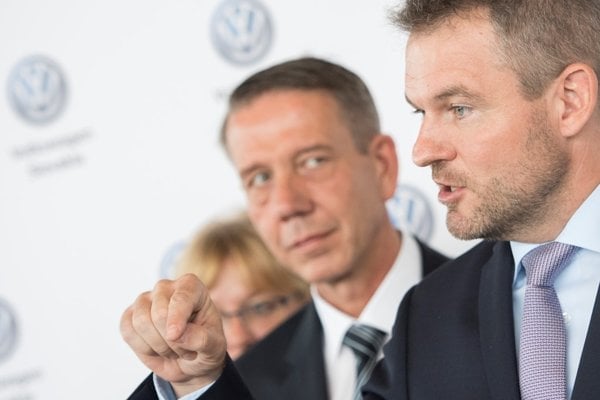 PM Peter Pellegrini and Ralf Sacht, chairman of the Board of Management at Volkswagen Slovakia, from right (Source: TASR)
Font size:A-|A+2

The Slovak cabinet will provide the Slovak arm of the German carmaker Volkswagen Slovakia with special measures and support it in the near future, mainly due to its many years of contribution to Slovakia’s economic growth. The construction of a bypass around the plant near Bratislava will be accelerated and the company will be allowed to raise quotas on hiring third-country nationals as it requested. Prime Minister Peter Pellegrini informed about the package of planned measures after meeting the Volkswagen Slovakia management on June 14. Slovakia will make this move for the second time, with the first being special measures created for U.S. Steel Košice steelmaker (USSK).

“Given the share of its production in Slovakia’s GDP, it deserves a special approach and attention from the government,” said Prime Minister Peter Pellegrini (Smer).

Volkswagen Slovakia is the largest private employer in Slovakia, the largest tax payer and one of the most important investors in the country.

It currently needs 1,850 new employees. In this regard, the measures will surely include the simplification of issuing work permits for foreign workers.

The carmaker acknowledges the cabinet’s approach. Ralf Sacht, chairman of the Board of Management at Volkswagen Slovakia, said that the carmaker wants to remain in Slovakia for the next 25 years at least.

“With the support of the cabinet we will manage this,” said Sacht.

Pellegrini considers Volkswagen Slovakia the shop window of the automotive industry in Slovakia and promises maximum support. He acknowledged the carmaker for the over-above remuneration of its employees.

“I want to also thank them for the wage level in the company,” said Pellegrini. “If Slovaks do good jobs, they require appropriate remuneration. This is true for Volkswagen.”

The carmaker currently employs 13,700 people. Last year the company generated a profit of €240 million and a turnover of €7.55 billion. Last year's investment exceeded €369 million, with nearly 362,000 vehicles being produced at the plant.