Companies apply for help from the state. 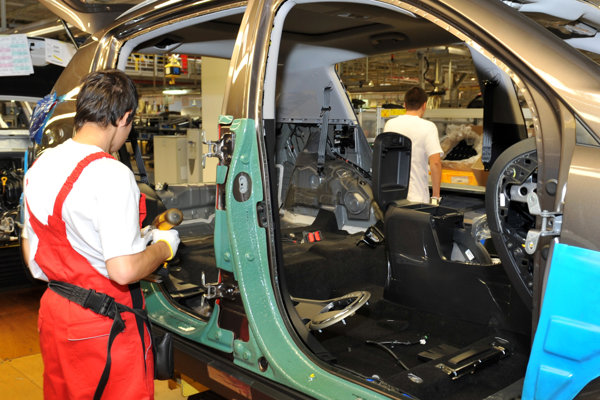 One of the three carmakers already producing in Slovakia. (Source: TASR)
Font size:A-|A+2

Create more than a thousand jobs and invest more than a hundred million euros – this is what five companies that supply car plants along with their products in Slovakia want to do in the country within the next few years.

In return, they are asking the state for almost €40 million in investment stimuli. The cabinet of Peter Pellegrini (of the ruling Smer party) could decide on this in the upcoming weeks. Firms have filed their plans for the review process.

New investments could help the regions where the companies decided to invest; this is probably especially true for the eastern-Slovak town of Kežmarok and its vicinity where the new plant of the German company Mubea will appear. Building new plants for expansion does not indicate the final arrival of a fifth carmaker, the German BMW, to Haniska near Košice, which has been speculated for some time.

Approximately every fifth inhabitant of the Kežmarok District is unemployed, equating to an unemployment rate of more than 15 percent. Compared to other districts, it ranks second worst; the only district that ranks worse is Rimavská Sobota, where the unemployment rate is still more than 17 percent.

In the upcoming years, the unemployment rate in the Kežmarok District could drop, however. The German firm Mubea will employ more than 500 people in Kežmarok by 2025.

“This is crucial for us, we are struggling with the unemployment rate,” vice-mayor of the town, Miroslav Peringáth, said. “We suppose that not just more investors would come here, but also new inhabitants.” Juraj Sinay of the Slovak Automotive Industry Association (ZAP) agrees, adding that this is in accord with what ZAP has been saying for a long time: free labour is in the east of the country.

New investment in Kežmarok can bring yet another advantage – people who left for the west of Slovakia or abroad could start returning back to the region. In its new Kežmarok plant, the German company will produce parts for the automotive industry.

- This can happen in industrial production, a technology centre and a centre of business services.

- This could involve either establishing a new facility and its expansion, supporting production of more output, or changing the whole production process.

- State can render aid either in the form of subsidies for long-term material or non-material assets, tax relief, contribution to create new job, or transferring a plot.

- It is always the government who decides on giving investment stimulus.

In this case, the aid will entail lines of a stabiliser and car clamps. In its Slovak plant, the concern plans to conduct research, too.

The plan is to invest a total of more than €50 million. In exchange, however, it asks the state for aid amounting to almost €15 million, €11 million of which will be taken from tax holidays.

While in the case of workers, the average overall labour cost should be slightly more than €1,300, for those in an engineering centre, it should much higher with an average labour cost amounting to more than €2,700.

“This will give the region regular income, thanks to which the activity of local entrepreneurs will also increase,” analyst of the Finlord company, Boris Tomčiak, opines.

The new investment near Kežmarok may help hoteliers and restaurant owners, as people would start using their services more once they have jobs that bring them stable income. In the future, this will probably help many other self-employed as well who mostly make small house works like repairs of tap valves or household renovations.

People from abroad needed, too

Mubea is not the only company for which the cabinet will decide on investment aid. Some more suppliers of carmakers have asked for state aid, including the companies Adient and Brose. Both of them plan to expand their Slovak plants.

While Adient wants to expand its plant in Lučenec by 105 people, the firm Brose in Prievidza plans to employ 350 new people. In its local plant, the company also plans to conduct research and development. The state can help Brose with a sum higher than €8 million.

Sinay points out, however, that the company may have trouble finding new people. In the Prievidza District, the average unemployment rate is 4.5 percent, which is below the state average of 5.4-percent.

“The labour market in the west (of Slovakia, ed. note) starts to be saturated,” Sinay explained. “Thus, searching for new workers will probably focus on foreign countries, too.”