Is the completion of Mochovce nuclear plant close?

PM Pellegrini inspected the construction site of the delayed project. 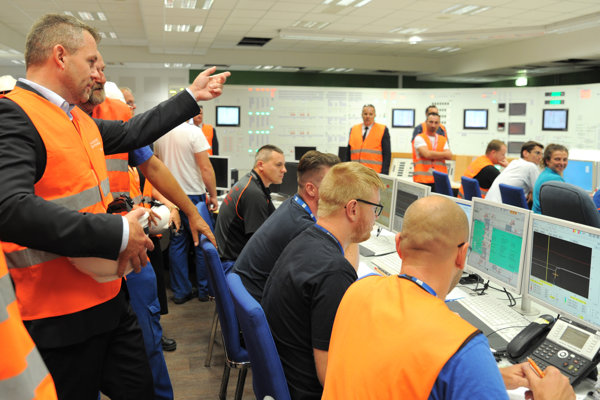 The third block of the Mochovce nuclear power plant should definitely be completed in the second quarter of next year. Prime Minister Peter Pellegrini said this after an inspection at the construction site of the delayed completion of the second two blocks of the nuclear power station in Mochovce on Tuesday, July 10.

Chairman of the Board of Directors of the constructor, the dominant electricity producer Slovenské Elektrárne (SE), Branislav Strýček, specified that the fourth block should be completed within one year after the completion of the third block.

“The dialogue with representatives of the government officials was open, quite tough,” said Strýček, as cited by the SITA newswire. “We are fully aware of the deadlines and do everything to avoid further delays. We are not building a house, so I am not going to announce the exact day of the completion of the units. But I can confirm the dates for the third block - the second quarter of 2019 and it will be about a year later for the fourth block. Of course, assuming that nothing happens in the meantime.”

Cold hydro testing for the most critical systems of the third block is planned for July and August.

“If this goes well, then the launching of the third block can continue,” said Pellegrini. “I firmly believe that sometime in the second quarter of next year it will definitely be put into operation, and then we can start work on finishing the fourth block.”

“It is not increasing the budget for completion,” said Pellegrini.

Economy Minister Peter Žiga added that the Slovak government holding a minority share in SE agreed to raise the budget to €5.4 billion, and even then the condition was that the Italian company Enel would provide a portion of these resources.

Based on the state of current work, nuclear fuel could be loaded into the third block of Mochovce within six months. SE has put into operation the system of physical protection of the premises of the third and fourth blocks. This is a prerequisite for loading fresh nuclear fuel.

During the inspection, Pellegrini said that he would return to Mochovce along with the economy minister in the autumn of this year.

“We will check in detail adherence to the timetable so that we do not see any further movements of deadlines, as has been the case over the past few years,” said Pellegrini, as cited by the TASR newswire. “If that happens, I will look for ways to resolve the problem with the minister, such as taking specific action against those who delay the construction work.”

When work started on the completion of Mochovce in late 2008, the scheduled end of the works was in 2012 and 2013 with a budget of €2.8 billion. In addition to the timetable, the budget for the completion of the nuclear units also changed several times. The latest budget for completion is €5.4 billion.

The new nuclear units in Mochovce will have an installed capacity of 471 megawatts after they are finished, which will cover about 13 percent of the total electricity consumption in Slovakia.