Cabinet approved purchase of 14 US F-16s

Opposition MPs suggest the fighter jets were not purchased in a transparent manner. 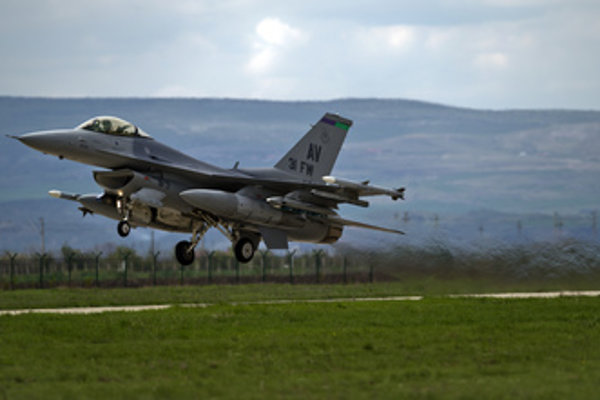 US F-16 fighter plane, of which 14 will be bought by the Slovak government. (Source: AP/TASR)
Font size:A-|A+  Comments disabled

Slovakia will purchase 14 US F-16 Block 70/72 tactical fighter jets and will sign the relevant contracts with the US government, Prime Minister Peter Pellegrini (the ruling Smer party) said on July 11, after a cabinet session. He added, as quoted by the TASR newswire, that for the package of 14 US fighters, training, ammunition and logistics, Slovakia will pay €1.589 billion over the following years.

The cabinet at its session accepted the proposal made by Defence Minister Peter Gajdoš (junior coalition Slovak National Party-SNS) to purchase the US F-16s rather than the Swedish JAS-39 Gripen jets, which were also on offer. The US government’s bid was evaluated as the most advantageous in terms of money and as the best solution in technical terms, according to Pellegrini.

Given the over 30-year life cycle of the American fighters, the US bid is 8 percent cheaper than Sweden’s, the premier added. However, the initial investment in the US machines alone is several hundred million euros higher compared to the Swedish Gripen jets.

“We have a commitment to bolster our defence spending as a NATO member up to 2 percent [of GDP],” Foreign Minister Miroslav Lajčák told TASR. “The Defence Ministry will be continuously receiving more money and that money cannot go to waste. It’s about making our armament compatible with NATO standards,” stated Lajčák, adding that the Russian jet fighters that Slovakia still uses do not fit the bill. He also noted that the decision was adopted by the cabinet unanimously.

The modernisation of the armed forces is inevitable and necessary, according to President Andrej Kiska, although the procedure chosen should be transparent, his spokesman Roman Krpelan told TASR.

The governmental decision to buy the US fighter jets has also been echoed at the ongoing NATO summit in Brussels, President Kiska said during the negotiations of the heads of state and prime ministers of NATO member countries on the same day.

The president pointed out that he mentioned this fact during his opening speech. He added that such purchases are not exceptional from the perspective of the alliance and the surrounding countries, because larger countries push larger amounts of military equipment.

Asked what he thinks about the selection of F-16 fighter jets, Kiska answered that the chosen team of experts made a clear and transparent selection and chose the best possible option from the perspective of our country. At the same time, he added that it is a good signal to our allies that we will have top-quality fighters.

“I’m glad we’re modernising the army and cutting off from the old Russian fighters,” he noted, as quoted by TASR. “It’s now necessary to bring the contract into practice,” he said, adding that the public must learn how public funds were used in the purchase of this combat aircraft.

The unclassified part of the material prepared by the Defence Ministry led by Gajdoš was published on Tuesday, July 10, in the evening. It does not contain information on the bids by the Swedish and US governments. Pellegrini explained, as cited by TASR, that both governments did not want their bids to be published. The procedure in the decision-making process to buy the fighters is being criticised by the opposition Freedom and Solidarity (SaS) party as well as by the non-parliamentary parties Christian Democratic Movement (KDH) and Progressive Slovakia.

The decision to buy American F-16 Block 70/72 fighter jets is grossly disrespectful towards the people of Slovakia and future generations, believes the non-parliamentary Christian Democratic Movement (KDH). The party does not raise criticism against the aircraft itself but rather “the manner in which the whole purchase was conducted procedure-wise”.

The manner in which the US fighter jets were selected was also criticised by Martin Dubéci of the non-parliamentary Progressive Slovakia. He pointed out, as cited by the newswire, that the public was not given any time for comments on the largest modernisation procurement in the history of Slovakia, as minister Gajdoš (SNS) recommended the cabinet buy the F-16 jets on the evening of July 10 and the cabinet greenlighted the motion the next day at noon. Dubéci does not find this normal and also objects to the fact that the publicly available document does not contain the purchasing price or any explanation as to why Slovakia needs up to 14 fighter jets.

The opposition Freedom and Solidarity (SaS) party considers the process of procuring fighter jets for the Slovak army to be a mega-scandal, too, and promises that if the party is in the government and has an influence on the Defence Ministry, this purchase will be subject to an honest audit even with a possible criminal outcome, if it proves to be necessary, said SaS vice-chair and former defence minister, Ľubomír Galko, in response to the purchase.

“This is how toilet paper can be bought,” SaS chair Richard Sulík commented, according to TASR. He pointed out that, for example, Justice Minister Gábor Gál (junior coalition Most-Híd party) admitted he had not read the material because he does not understand it. Galko added that the fighters are being bought without us knowing whether we need the US machines and whether 14 of them are necessary. He would also like to hear an answer to the question of why renting Swedish Gripen jets is not sufficient. Galko emphasised that €1.6 billion is a lot of money that doesn't belong to SNS but to all taxpayers.