Bratislava looks different from a kayak

The oldest water sports club in Slovakia organises a kayak school for the public. 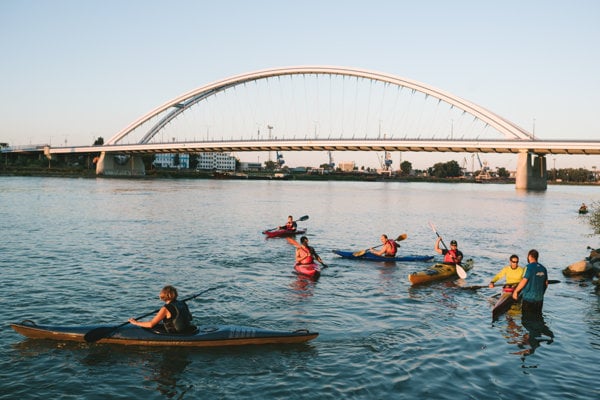 The Dunajčík canoe club has been running a kayak school for the third year. (Source: Courtesy of VK Dunajčík)
Font size:A-|A+39

“It is a completely different view of the city from a kayak,” said Michal Fajta. As a student, he used to go kayaking in the Danube’s Karlovoveská Zátoka bay in Bratislava, which houses several water sports clubs. Now he goes kayaking in the Dunajčík canoe club on the opposite side of the Danube within its Kayak Incubator project.

Three years ago, the oldest canoe club in Slovakia resolved to share its love of the Danube and water sports with the lay public. It launched the kayak school, in which instructors teach the basics of kayaking.

“Many boathouses operate rather as closed clubs,” said instructor Ondrej Michalík at Dunajčík when recalling beginnings of the Kayak Incubator. “But Dunajčík has decided to open and enable also lay public to go on the Danube.”

Since this time dozens of people have attended the kayak school. Now they also kayak on their own and some even have bought their own boats.

During the first year, in 2016, the incubator took place in a club atmosphere. At that time mostly friends and acquaintances of the Dunajčík’s members or people who used to go to the Danube, but feared to going on a boat on their own, attended its lessons. Next year, his sister, Katarína Michalíková, joined the organising of the incubator. They began to promote the event more and also people who had not heard about Dunajčík before started arriving. In the time being, in its third year of existence, the incubator has turned into a self-running project that enjoys high interest.

“People tell each other about the incubator and so many attendants bring new people,” said Michalíková. 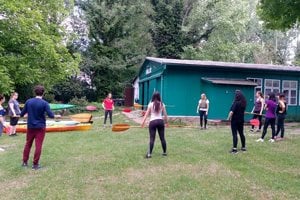 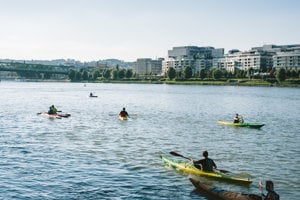 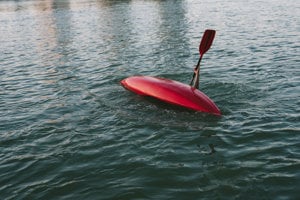 The Kayak Incubator at the Dunajčík canoe club (22 photos)

The incubator is attended by people of various occupations when their age is especially somewhere between 25-45 years.

“When they end up at work, they come here by car or by public transport and go on the river to kayak,” said Michalíková, adding that also those who devoted more time to water sports in the past but stopped, are coming. “Now they remember that the Danube is still flowing here.”

You have to know how to swim and respect the rules

The basic condition for signing up for the kayak school is to know how to swim, be capable of basic movement coordination and respect rules.

“Nothing extra is required,” said Michalík. “The incubator’s attendants learn the basics of kayaking on the Danube in three lectures on average.”

At the very beginning, Michalíková was especially afraid to go with the beginners straight into the main stream of the Danube. Usually beginners learn to kayak in a bay or on standing water.

“In the end our fears were unnecessary,” said Michalíková. “Maybe only one out of 20 attendants capsize into the water. Since they have life jackets, there is no imminent danger. Moreover, if they handle the basics of kayaking on the Danube, they do not need to be afraid of any standing water. On the contrary, this does not work vice versa.” 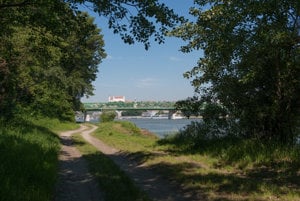 Experienced watermen recommend maintaining a healthy respect before the Danube, but to eliminate unnecessary fear.

“Fear will not help you in the water, but respect,” said Mikuláš Bíro, who is helping in the incubator. “You will not do things that we explicitly explain to you not to do, for example not to go too close to the ships or not go over that pillar. Mistakes happen when someone does not respect the rules.”

On the lawn in front of the boathouse instructors first teach beginners how to board the kayak, how to get out of it, how to hold the paddle and how to paddle. Only then do they go on the river. The first lessons take place between the Old Bridge and the Apollo Bridge close to the Petržalka bank of the Danube. They start at a short stretch between the stairs leading to the river below the boathouse and a pontoon. Here they learn to go straight and how to bend and so on.