The Most-Híd nominee who stated “differences of opinions” with the new minister as reasons for her step will be probably be replaced by Edita Pfundtner. 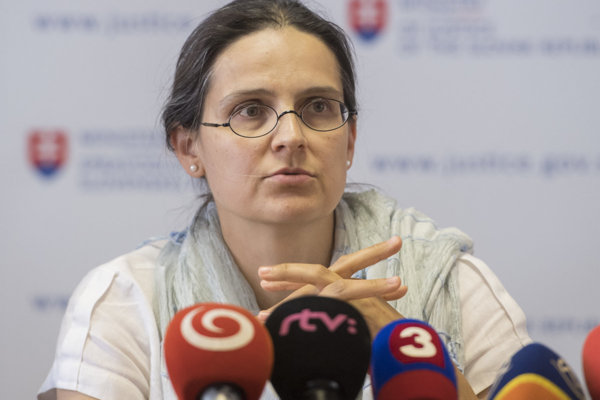 Mária Kolíková (of the junior coalition party Most-Híd) has tendered her resignation as Justice Ministry state secretary and is due to be replaced by Most-Híd MP Edita Pfundtner, Justice Minister Gábor Gál (Most-Hid) stated on August 21.

Kolíková is leaving the ministry five months after the resignation of the previous justice minister Lucia Žitňanská (Most-Hid), with whom she served at the ministry under the government of Iveta Radičová (2010-12), the TASR newswire wrote.

The Denník N daily, which broke the news, first published Kolíková’s resignation letter, in which she stated that she had intended to remain at the ministry following Žitňanská’s departure with an eye towards completing a judiciary audit project. “However, the difference in opinions regarding both the management of the ministry as well as issues addressed by the Justice Ministry are so fundamental that functional cooperation is no longer possible,” Kolíková wrote as cited by TASR, adding that this surfaced in the wake of her recent statements on the election of Constitutional Court judges and latest developments. The new minister viewed her statements as confrontational, she added.

The ministry accepts and respects Maria Kolíková’s request to resign as state secretary, claimed ministry spokesperson Zuzana Drobová. “Ms. Kolíková and Mr. Gál had differing opinions on how to lead the ministry,” the spokesperson informed, according to TASR. “Such a lack of congruence could in the future have prevented the carrying out of tasks that the ministry faces in meeting the Government Manifesto.” She added that minister Gál will propose Koláková’s replacement as early as the August 22 government session.

The ex-state secretary’s decision is respected by Most-Híd chair Béla Bugár. “He also respects the minister’s right to propose an individual for the post of state secretary whom he fully trusts and with whom he will be able to cooperate and meet the tasks in the Government Manifesto without difficulties,” Most-Híd spokesperson Klára Debnár said, as quoted by TASR.

Ex-minister Žitňanská (2016-18) appreciates Kolíková’s decision. “First off, it’s necessary to thank her for the work she did on projects regarding an effective judiciary,” said the ex-minister for TASR, who resigned herself due to events following the murder of journalist Ján Kuciak and his fiancée.

“She really deserves gratitude. There are only a few people willing to work for the judiciary in such a passionate manner,” she continued, adding: “On the other hand, I must say that I absolutely understand Mária Kolíková because in the situation that we’ve seen since the murder of Ján Kuciak, it's getting increasingly difficult to fight for a better judiciary in the country alone. Hence, if she doesn’t see eye to eye with the minister, I absolutely appreciate that.”

And what about a replacement?

Most-Híd MP Edit Pfundtner has confirmed that party boss Bugár and Justice Minister Gál have reached out to her with an offer to become Justice Ministry state secretary in the wake of Kolíková’s resignation from the post.

“I take it as a display of trust towards me,” she noted, according to TASR. “As everyone who knows me can attest, I don’t shirk from work or responsibility," Pfundtner said, adding that if she gains the confidence of the government on August 22 she will take up the vacated post.

Pfundtner is set to be replaced in parliament by István Vavrek.