In central Slovakia, storms disrupted power in some places. More storms and rain are expected Monday afternoon and evening. 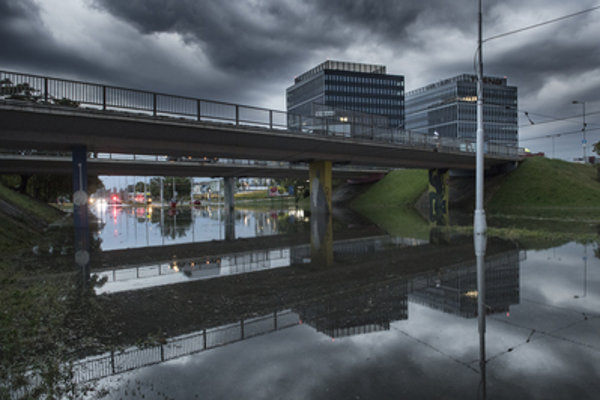 The Ružinovská-Bajkalská crossroad in Bratislava is impassable after torrential rains of September 1, 2018. (Source: TASR)
Font size:A-|A+9 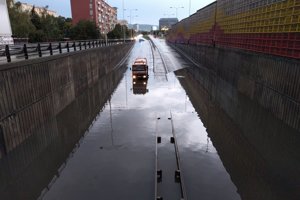 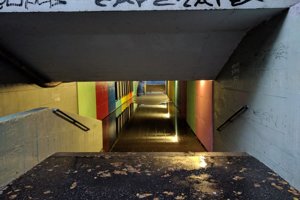 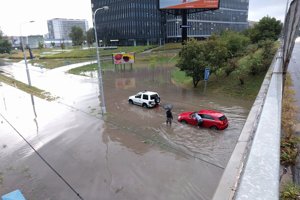 Meteorologists have issued second- and third-degree warnings against rain and floods, while fire-fighters have reported more than 100 operations to help alleviate the situation.

Torrential rain caused problems in the Ružinov Hospital as well: work at the central reception office was suspended and as the basement was flooded, the lifts were not working.

Although the hospital continued to function, it had to send patients requiring urgent hospitalisation to other hospitals, mostly to Kramáre and Petržalka, Slovak media wrote.

The next day, central Slovakia and especially some places in the Žilina and Banská Bystrica regions (e.g. Detva, Pohorelá) saw intense storms that caused blackouts and suspended electric power, the TASR newswire wrote, adding that these were caused by overvoltage, cracked insulators, broken wiring and tree branches falling on the electric lines.

Since the afternoon of Monday, September 3, however, the flaws and obstacles should be removed and power supplies renewed.

By Monday noon, all roads in the capital were passable, the consequences of the heavy rains having been cleared and the Trnavské Mýto underpass was fully functional again, TASR wrote, citing city officials. They added that after the June 2018 torrential rains which hit Bratislava so hard, the city has focused on the worst-hit sites and on cleaning the sewer inlets. In 2019, the capital plans to invest more than one million euros in the maintenance of the sewer systems and in increasing the quality of sewer inlets and drain areas.

More rains and storms are expected for September 3 in the late afternoon and evening.