She won a running race without sports footwear. Now she met the president

The story of a young girl who won a run back in June – in ballerina shoes – went viral on Facebook. 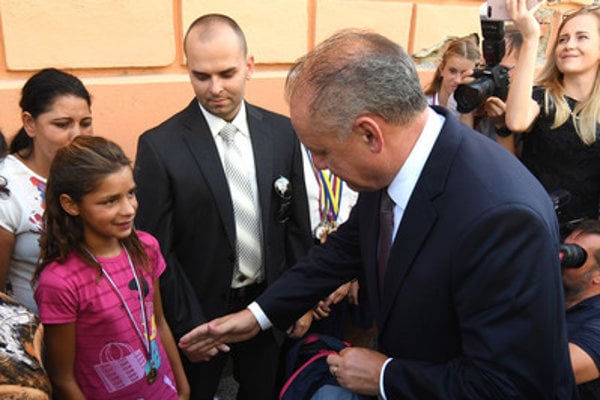 Annamária Horváthová, the winner of the 750-meter run in the Run for Health competition, aged 13, became well-known thanks to a viral photo on Facebook that shows her winning in ballerina shoes, beating the girls in a special outfit in half a round. She has become a role model among talents from poorer families – she lives with her mother and six siblings – needing more attention and help, the Sme daily wrote.

Her picture has 170,000 clicks on Facebook and has evoked discussion on support for socially disadvantaged talented children.

The girl met with President Andrej Kiska during his September 3 visit to Moldava nad Bodvou (Košice Region), where he visited the community centre in the Roma settlement of Budulovská and was welcomed with applause from almost 200 locals.

Following her success at the running race, the head of a leisure-time centre for children and youth, which co-organised the run, promised Horváthová a coach for her next training sessions, while the head’s son sponsored the first running shoes for the girl.

Moreover, she will receive a transparent account where money to support her can be collected: to help the young student from Moldava nad Bodvou develop her talent.

Improving the lives of Roma

With respect to the problems that Roma face, Kiska told the media that the solution should be sought at the level of the deputy prime minister and not just the government proxy for Roma communities, seeing as the problem falls under the jurisdiction of several ministries.

“In Slovakia, the Roma minority makes up almost 10 percent of the total population, but it’s as if some politicians are refusing to concede that they fail to address the fundamental problems plaguing this community,” the president noted, as quoted by the TASR newswire. “Here, in Moldava, I must say that brute force will never resolve the basic issues that are the underlying causes of the most serious problems: low education, inadequate hygiene in Roma settlements and the unwillingess of many employers to hire Roma.”

The head of state believes that the solutions to these problems are evident, yet they must be implemented in practice. The most important is the education of Roma and pre-school preparation of Roma children, pointing to the abysmal conditions in which children grow up in Roma settlements.