Prepare for one more day this year when shops will be closed.

Slovaks will enjoy one more day off this year. Parliament approved the proposal to declare October 30 a national holiday to remember the 100-year anniversary since the establishment of the first Czechoslovak Republic.

On October 30, 1918 the representatives of the Slovak nation adopted a declaration in Martin, known as the Declaration of the Slovak Nation, claiming independence from the Hungarian Kingdom (which at the time was part of the Austro-Hungarian Empire) and declared a union with the Czech lands as part of the new state, Czechoslovakia.

The proposal was supported by the 96 MPs present, the TASR newswire reported.

As with other national holidays, people are expected not to work on October 30 and all shops will be closed.

The proposal to declare October 30 a national holiday was initially criticised by the Slovak National Party (SNS), voicing the concerns of employers that this would be a precedent. 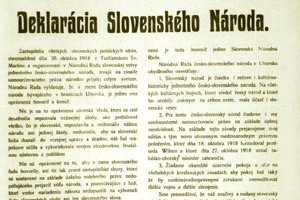 “We don’t see a reason to declare such non-scheduled national holidays for the future,” the party said, as quoted by TASR.

However, it eventually supported the proposal.

The national holiday still has its critics though. Opposition MP Ondrej Dostal said that the adoption of the Martin Declaration does not symbolise the establishment of Czechoslovakia.

“The day which symbolises it, and also the humanistic tradition of Tomáš Garrigue Masaryk and Milan Rastislav Štefánik, is October 28,” Dostál said, as quoted by the SITA newswire, adding that October 30 is not even a national holiday.