In an interview, the parliamentary speaker explained how he plans to curb the media and tax the retail chains. 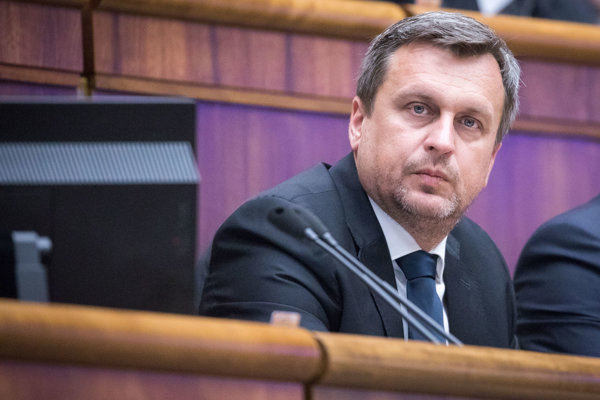 Speaker of Parliament Andrej Danko has been refusing to show his postgraduate thesis from the Law Faculty of Matej Bell University in Banská Bystrica after the media accused him of plagiarism. In an interview for the Nový Čas daily, Danko (aged 44) explains that he keeps his thesis out of sight for fear that it may be abused for a political fight.

As for the education system, which is widely criticised in the long term, falling under the party he chairs – the junior coalition Slovak national party (SNS) – he told the daily that he cannot be blamed for everything, and that his merits, such as the levies for retail chains, holiday vouchers meant to boost tourism, arms trading set to benefit private companies, etc., must be acknowledged.

Danko also points out in the interview published on October 24 that his past is spotless (unlike some other party leaders) and he has no criminal record, back taxes, no fraud, no family violence, no shady privatisation records and that he is the victim of blackmail rather than someone with a shady past.

Asked about the medialised intention to resign from his parliamentary post, Danko answered that he has been reconsidering his political plans and he would like to fight one more election (with the SNS) with an agenda close to that of Hungarian Prime Minister Viktor Orbán – “a programme of tough centralisation of state that installs discipline and order here”. He added that he sees retail chains as crooks that do not pay adequate taxes to the state coffers and offer many millions to the media to gain popularity instead.

As for his visions for Slovakia, the parliamentary speaker said he instead has a vision for his policy: taking the Polish PM and Hungarian PM Orbán as his professional models defending the interests of their citizens and as partners for Slovakia within the Visegrad Group.

Danko’s programme in 2020 will be similar to both that of Law and Justice (PiS) in Poland and the Fidesz party in Hungary: better protection of state and Slovak workers, more pressure on social certainty and security and greater investment in sport and culture. But he also wants to limit the freedom of the media in the digital era, adding for Nový Čas that he wants to file “a strong law controling the right to correction and apology” targeting the Slovak media who are not just against Danko but against all of society.

Touching on his plans to resign, Danko explained that he does not have time to campaign and travel across the country while heading parliament and so he wants to wait for the results of the municipal and presidential elections before deciding how to tackle the parliamentary one.