Seven out of ten job applicants in Slovakia claim to speak English. 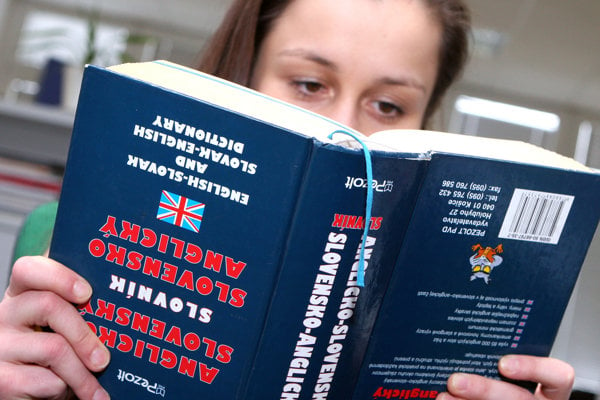 Sofia Fall is an American who came to Slovakia to teach English for one school year at a high school in Nitra.

“I think my students are really good at communicating what they mean in English, even if they don't have exactly right word or grammar structure,” Fall, who teaches 14- and 19-year-olds, told The Slovak Spectator.

She is one of the several Americans that come to exchange every year within the Fulbright Program. Her students have a chance to improve their English skills through conversation with her as a native speaker.

The data of the recent research EF English Proficiency Index (EPI) have shown that there is indeed room for improvement of English skills among Slovaks.

Slovakia scored 24th among the 88 countries that participated in the research, with a score of 58.11 points. Czechs improved best among the neighbours, jumping 2.12 points and scoring 20th position. Poland scored best among the Visegrad Group countries, at 13th. Sweden, the Netherlands, Singapore and Norway dominated the overall ranking. 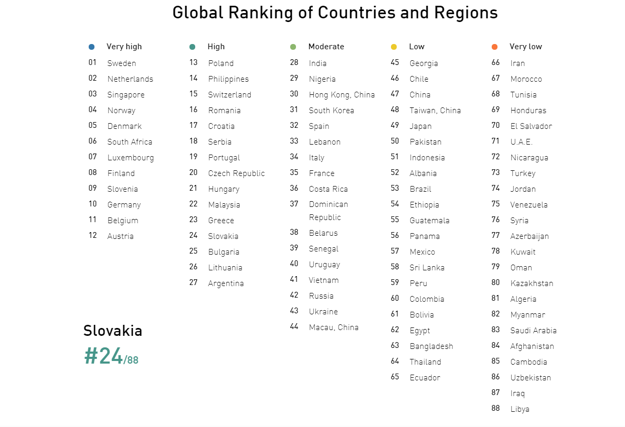 Research showed that Slovak women speak English slightly better than men. The knowledge is balanced among generations, with the age group 21 to 25 years having the best English, but there is no significant difference between them and people ages 26-40. The overall language skill is described as high.

“Most of my students probably wouldn't say they're fluent in English, but I think it's amazing how much they do know how to say,” Fall said, adding that for many of her students she is probably the first native speaker they have ever spoken with in depth.

In Fall’s experience, grammar is the tricky area for her students, but the important thing is that they are able to get their point across. She is impressed by their ability to have complete and interesting conversations.

In Slovakia, English is currently compulsory for pupils from third grade (around 9 years old) and they can choose a second language to learn in seventh grade. This is likely to change soon, after Education Minister Martina Lubyová (SNS nominee) announced that the ministry wants to open up the possibility of students choosing their first foreign language as of the 2019/2020 school year.

“We want to let parents and also schools choose. We do not want to force all children to learn English as the first language,” said Lubyová as quoted by the TASR newswire. She argues that the level of German language skills has worsened among Slovak students. I n the new system, children could also choose German, French, Italian, Spanish or Russian as their first foreign language.

While school systems all around the world make English a compulsory language to teach children to understand each other and work in, Slovakia may go in the opposite direction, reads the press release of the EF EPI. The organisation stressed that English is an important asset on the labour market.

“The times when English was required only in top management, diplomacy or - very logically – translation, is gone,” said Linda Pfefferová, manager of EF Slovakia.

The number of international companies in the world over increased between 2006 and 2016 by 25 percent, the press release reads. Ignorance of English is often a barrier in reaching a new and better position at work, especially since many foreign employers consider Central Europe an interesting area for expansion.

Required on the job market

Nikola Richterová from the Profesia job-search website explained that knowledge of English is considered almost a matter of course at some positions.

“It is mainly the result of many private foreign employers,” she explained for The Slovak Spectator, adding that this goes mostly for the Bratislava Region, where English was required in 46 percent of job ads in 2017.

Employers in the Košice Region require English in 30 percent of ads. The majority of the ads fall under the field of marketing or management. The rate of German required in ads in 2017 was 11 percent around Slovakia.

The English language skills of job applicants differ between Bratislava and other regions. Profesia's statistics show that 80 percent of job applicants in the region around the capital state in their CVs that they speak English. The second and third highest are Žilina and Košice regions, respectively.

On the contrary, the lowest rate of English speakers is in the Nitra Region, with 70 percent of applicants claiming to have English language skills.

Recently, however, employers seem to be easing up on their requirements, Richterová noted. This is due to the lack of available workers. Fewer and fewer job ads require language skills, but speaking a foreign language remains an important asset.

“If we talk about ambitious employees who would like to reach company management, knowledge of a foreign language, mainly English, is almost necessary,” Richterová said.