Slovakia has many skilful people. Students should meet them

The new project by the Pontis Foundation tries to motivate young people through stories of successful business people. 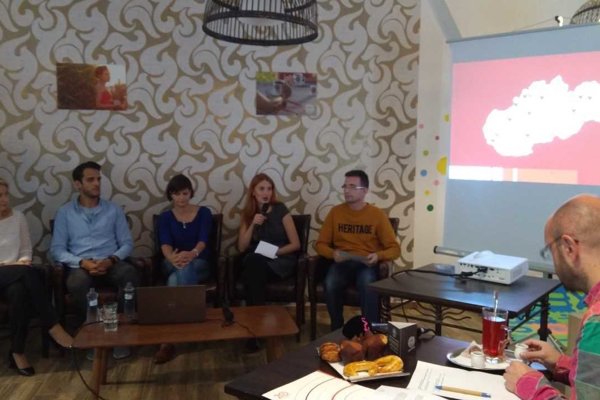 The presentation of This is 21 project (Source: Courtesy of Pontis Foundation)
Font size:A-|A+13

Have you ever imagined what it would be like to return to your school and have the opportunity to meet with the students who now sit behind your desk?

The Pontis Foundation has developed a special one-day project that enabled business leaders to do exactly this. They returned to their own secondary schools and discussed their path to success with students and what young people can do to use their talents and achieve their goals.

“My school failed to teach me how to make mistakes,” said Ivana Molnárová, CEO of the job-search company Profesia, who talked with the students of the Business Academy on Nevädzova Street in Bratislava. She was one of the 50 business leaders who returned to their alma maters in early October.

As Molnárová stressed, all people can be creative, but if they are afraid of making mistakes, they will not be able to work on themselves and grow.

“We’re actually searching for people who want to make mistakes,” she added.

Young people should focus on developing skills that will help them succeed and face the challenges this century will bring. This is the main message of the This Is 21: Prepare Yourself for the 21st Century project, prepared in cooperation with the Slovak Alliance for Innovation Economy (SAPIE).

Since development is quick and nobody can say how society will look in 10 years, it is necessary that young people particularly focus on soft skills, like critical thinking, team cooperation and self-discipline, said Ivana Uličná, programme manager of the Pontis Foundation. This is the field where successful business leaders can help.

“There are many skilful people in Slovakia who can pass on their experiences to others,” Uličná told The Slovak Spectator.

As she admitted, while at school, it was very inspiring when an interesting person came and talked to them.

“We hope that these business leaders will motivate students to start working on themselves already at school,” Uličná said.

Why are soft skills important?

The need for soft skills has been confirmed by the international PISA tests.

“In OECD countries, the focus is on project education and searching for activities, which apart from knowledge, require critical thinking, the ability to solve problems and work on a team,” said Viktor Križo, a teacher at the primary school on Dubová Street in Bratislava.

However, the PISA tests results from 2015 suggest that Slovak students lag behind the OECD average when it comes to solving problems on teams, he added.

In Križo’s opinion, it is necessary to include more soft skills into the education process since they are important for pupils’ development.

The need for soft skills is visible in job offers. Employers require an increasing number of soft skills rather than hard skills. As a result, secondary schools graduates seeking a job should have in particular presentation and communication skills, as well as pleasant behaviour. University graduates should not lack analytical and logical thinking as well as organisational skills, as the data from Profesia suggest.

“Young people should realise that the labour market will require more and more creative people who can make decisions on their own,” Molnárová added.

This is why young people should be curious and willing to learn new things, she added.

Another important factor is that soft skills can help people survive the arrival of robotisation and automation. It currently seems that the country is not prepared for this change, which is why society should look at ways to change it, Molnárová stressed.

Be curious and work in teams

The project seems interesting for both schools and business leaders. As for the former, 37 schools in 17 towns participated in this pilot year, being very grateful for such an opportunity, Uličná said.

Also, the leaders praise the fact that they could return to their alma maters.

Katarína Sýkorová-Chmelová, head of the legal department at BNP Paribas Personal Finance SA, admits that she had to struggle to learn the soft skills necessary for her job and work on a team. Another important skill is flexibility.

When she was a student, the focus was mostly on gaining knowledge and achieving individual success.

“My life experiences forced me to change my thinking, adapt to situations and work more with my colleagues,” Sýkorová-Chmelová told The Slovak Spectator.

This too motivated her to participate in the project and return to her own secondary school, the Grammar School Metodova in Bratislava.

Another graduate from this grammar school is Dušan Duffek, co-founder of 0100 Ventures. As he stressed, young people who currently study at secondary schools and universities will become leaders in various areas and help move Slovakia forward. He considers the project an investment into their future as well as ours.

His main message to students is to be curious, even though the school may not support it. However, there are many other ways of developing one’s curiosity outside school walls.

“The future belongs to curious people,” Duffek said. “Only those who look for answers have a chance to succeed.”