The foreign affairs minister also admitted to some disputes with PM Robert Fico. 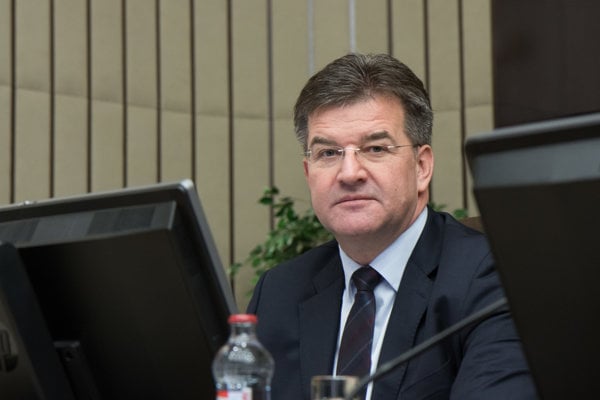 “Since I took the ministerial post, I’ve been trying to pursue the vision of a democratic, European Slovakia that is part of solutions,” Lajčák said before the November 20 government session, as quoted by the TASR newswire.

Moreover, he warned that the government plans to discuss simpler rules for employing people coming from non-EU countries.

“This compact defines exactly what legal, regulated migration is,” the minister added.

Meanwhile, the private broadcaster TV JOJ reported that Lajčák has admitted to a dispute with Smer chair Robert Fico. With their attitudes towards the migration document, politicians want to solve the problem with their preferences, he reportedly added.

“If MPs want to separate Slovakia, be a part of problems and let others offer solutions, I cannot pursue thus,” Lajčák explained, as quoted by TV JOJ.

The information surprised PM Peter Pellegrini (Smer), who had just arrived to the session, the broadcaster added.

Apart from the Slovak National Party (SNS), Freedom and Solidarity (SaS), and Sme Rodina of Boris Kollár, the Smer party criticised the document, calling it unacceptable, TV JOJ reported. Fico even published a video on Facebook on November 18, in which he claimed that the document is not in compliance with Slovakia’s migration policy and that the MPs should give a clear mandate to the person who would attend the negotiations over the UN compact at their next session.

Lajčák admitted that he had talked with Fico before the video was posted.

“The basic element has been taken into consideration: that we cannot sit behind the oven or post statuses on Facebook when we have objections, but go there and discuss it,” Lajčák said, as quoted by the SITA newswire.

When asked why the critical comments are coming up now, even though the document had been discussed for several months, even during his presidency over the UN General Assembly, Lajčák said that it is not about the document, but the hunt for preferences.

“Everybody is dealing with our small, stay-at-home politics,” the minister added, as quoted by SITA.

When asked whether this includes Fico, Lajčák repeated that he meant everybody.

Compact will be discussed in parliament

The parliament is expected to discuss the objections to the Global Compact for Safe, Orderly and Regular Migration. Lajčák will talk about it during the session of the parliamentary foreign affairs committee on November 21.

SNS does not want the document to be binding for Slovakia. Its MP's propose that Slovakia not ratify it, TASR reported.

The adoption of the migration compact was supported by 193 UN member states in September 2016, while the preparation of the text started in April 2017. The aim of the 34-page document is to better help organise migration flows and strengthen the rights of migrants. It emphasises the sovereignty of countries and their right for their own migration policy.

Kiska concerned about the resignation threat

President Andrej Kiska is worried about the “conflict” in the government and the threat of Lajčák’s resignation. He expects that the personal disputes in the coalition will be solved so that Slovakia will remain trustworthy in the eyes of its partners, said the president’s spokesperson Roman Krpelan.

At the same time, the president considers the UN compact on migration a non-binding document that does not oblige Slovakia to accept migrants. On the contrary, it emphasises the right of every country to decide who can or cannot enter and stay on its territory, as reported by TASR.

The document should also be a manual to help create conditions under which people will not be forced to leave their homes and will be allowed to live a decent life in their country.

“The president also regrets that every time the word ‘migration’ is mentioned, it works as a red cloth for many politicians that makes them use populist statements,” Krpelan said, as quoted by TASR.

Pellegrini hopes that the politicians will agree at the upcoming session of the parliamentary foreign affairs committee on how Slovakia will express its objections with the migration compact. He also admitted that Lajčák’s resignation statement surprised him, but he considers it a hypothetical possibility, as reported by TASR.

Speaker of Parliament and SNS chair Andrej Danko, meanwhile, voiced his refusal to support the migration compact in parliament.

“In its current form the global compact is unacceptable for us,” he said, as quoted by the Sme daily.

SNS does not want anyone from Slovakia to be present at the discussions held in Marrakesh.

He does not plan to leave the coalition and hopes that together with Smer, they will find a compromise.

When commenting on Lajčák, Danko said they have a correct relationship, Sme reported.