The imminence of a presidential election can mean only one thing: the season of cliché and dog-whistles is upon us. 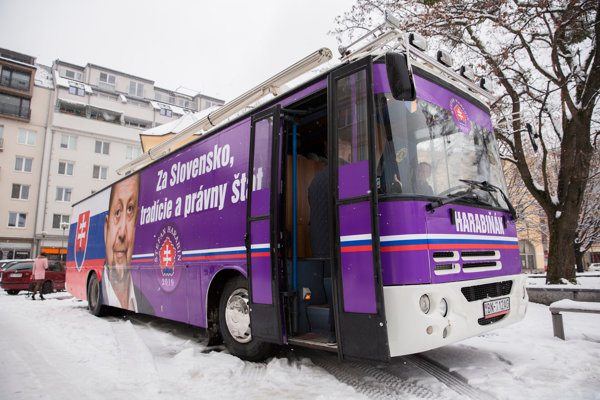 Since January, billboards bearing the confused messages and gurning faces of the numerous candidates have sprouted across the country. Their varying perspectives can be disorientating.

Zuzana Čaputová, we learn, is ‘My President’. Most-Híd leader Béla Bugár, the discount-store George Clooney of Slovak politics, is ‘Our President’. And Bohumila Tauchmannová is ‘the President of the Street’ – whatever that means.

Far-right candidate Marian Kotleba has resorted to far-right virtue-signalling: ‘Stop LGBT!’ and the bizarrely off-topic ‘Slovak Women are the Most Beautiful, We Don’t Need Foreign Women’. (Quite what he would do, as president, to halt this deadly scourge is not specified.)

Not a million miles away, Mečiar-apologist Štefan Harabin is touring the country in the Harabiňák, a purple bus emblazoned with Slovak emblems and a close-up of Mr Harabin’s ornate facial hair. He promises a ‘Traditional and Legal State’: presumably a return to the halcyon days and wild privatisation of the 1990s. Mercifully, even as president, he would have little power to achieve this.