Ice-hockey fans: We enjoy Bratislava but finding your way around the capital is difficult

There is only one information kiosk at the bus station in Bratislava. 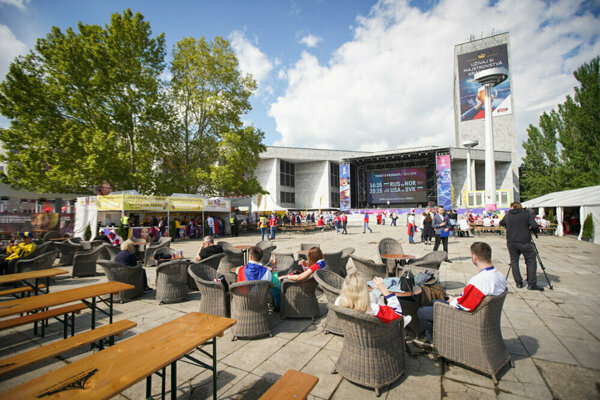 The fan zone during the 2019 Ice-Hockey World Championships is located near the Trnavské mýto crossroads in Bratislava. (Source: Sme)
Font size:A-|A+44

Russians and Norwegian fans are flooding Bratislava on the sunny Friday afternoon of May 10, as half of the 2019 Ice-Hockey World Championships in Slovakia is about to kick off in Bratislava, while the other is about to start in Košice.

While a middle-aged woman, wearing a mask of Princess Marfa from the popular Russian Christmas tale Morozko - Father Frost, is taking a photo with her daughter by Ondrej Nepela Stadium in Bratislava, some other Russians are hopelessly trying to buy tickets for the very first game.

In fact, less than an hour remains before it starts. Played in Bratislava, the opening match of the championships will be Russia facing off against Norway but the presence of the Czechs and the Swedes is already being felt in the capital. Both nations face each other on the same Friday night.

“We hope we will win, but we are not confident of a victory,” said Czech Karel Červený, who has come to watch the championships live for the first time.