The Iron Lady of Slovakia 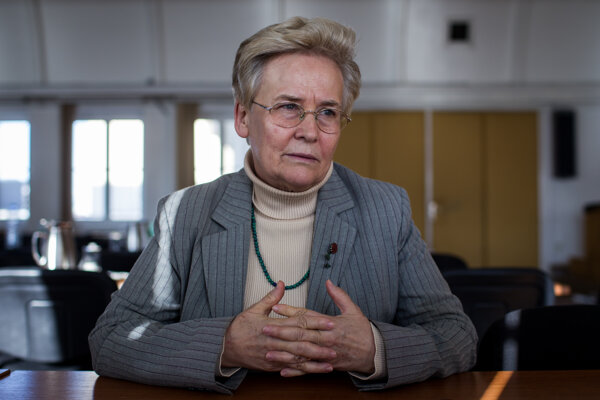 A prominent leftist politician and stateswoman at both the domestic and European level; a finance minister, whose reforms at the turn of the millennium helped Slovakia stabilise the tax system, access the European Union and survive the global crisis after 2007; an academic who devoted most of her life to youth education on economic and social issues; and a woman who has been nicknamed the Iron Lady of Slovakia and Brutal Brigita for her vigorous actions: these are just a few descriptors of Brigita Schmögnerová.

She was one of the first remarkable female ministers in post-1989 Slovakia, but she considers herself an economist rather than a politician.

Schmögnerová had spent more than 20 years in science before she embarked on her political career. Born on November 17, 1947, in Bratislava, she started her academic career at the College of Economics in Bratislava [VŠE, now the University of Economics – ed. note] in 1966-1971. After completing her studies, she went on to work as a lecturer at the Department of Economic and Mathematical Methods of VŠE’s Faculty of Management.

Later, she obtained a postgraduate degree in mathematical statistics from the Faculty of Natural Sciences of Comenius University in Bratislava, and in 1979, she received a Candidate of Sciences degree from her alma mater, VŠE. She continued her studies at the Centre of Planning and Economic Research in Athens and Georgetown University in Washington, D.C.

Schmögnerová’s political career started right after the 1989 Velvet Revolution, which Czechs and Slovaks now mark on her birthday, November 17. At the beginning of the 1990s, the Party of Democratic Left (SDĽ) nominated her to the position of the head of the economic policy department at the Office of President Michal Kováč.

“It was, as it turned out, the start of my future political career,” Schmögnerová told The Slovak Spectator.

In March 1994, after the fall of the second cabinet of the authoritarian-leaning PM Vladimír Mečiar of the Movement for a Democratic Slovakia (HZDS), Jozef Moravčík formed a temporary government of a broad coalition of diverse parties. Schmögnerová took the position of deputy PM, responsible for economic policy in his cabinet.

The early elections that followed ended in the failure of SDĽ, resulting in Mečiar’s return. Schmögnerová thus joined the parliamentary opposition and took up a job in the parliamentary committee for finance, budget and currency.

In addition, the party appointed her to run as their candidate for the president of the republic. At that time, the president was still elected in parliament rather than by the people in a direct vote like now. She failed to get elected, and she never considered running for president again.

Schmögnerová played an instrumental role in the reforms that the new government that came to power after the defeat of Mečiar in 1998 promoted.