Petra Kotuliaková: Coming home and changing the face of Slovak IT

Move from Paris to Petržalka was not always easy. 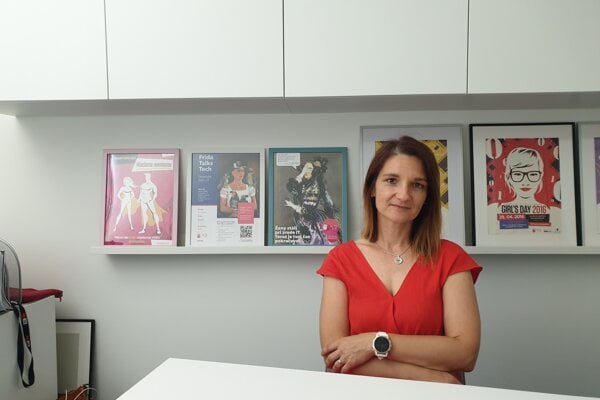 The walls of Petra Kotuliaková’s office are plastered with posters of women surrounded by technology, binary code and one showing the artist Frida Kahlo wearing a smart watch and a virtual reality headset.

Like most women in Slovakia, Kotuliaková, 44, did not study IT and instead pursued studies in economics on the advice of her parents who said it would guarantee her a job.

But since her return to Slovakia over a decade ago after working in Paris for a multinational firm, she has become a pioneer for women in the Slovak IT industry, founding the Aj Ty v IT (You Too in IT) NGO which works to increase the number of women in IT in the country.

Speaking to The Slovak Spectator at Aj Ty v IT’s offices at the Faculty of Informatics and Information Technologies (FIIT) of the Slovak University of Technology in Bratislava, Kotuliaková explains how she got into IT, how her work to get more women to study the subject is paying off, and how she knew she had made the right choice coming back to Slovakia.

“I have never regretted studying economics but it was only after we started Aj Ty v IT that I realised how my life could have been different had I had a better grasp of the basics of technology,” she says.

Kotuliaková’s path into IT was a roundabout one.

She studied economics at both secondary school and university and during her undergraduate course took up an opportunity to study in France for a semester. Then, while doing a PhD in Slovakia, in 1999 she applied for a programme run by French education authorities encouraging people from the former Eastern bloc to come to France, finish their education and then work in a French company for a time.

She took up the offer and when she finished her studies, having already worked for a marketing firm owned by her friends in Slovakia while doing her PhD she got a job in the marketing department for international food company Danone, dealing with markets in the Middle and Far East as well as Europe. She was the only Slovak in the company.