The Ján Kuciak Investigative Centre revealed property and business activities of an FSB agent in Slovakia, near Bratislava. 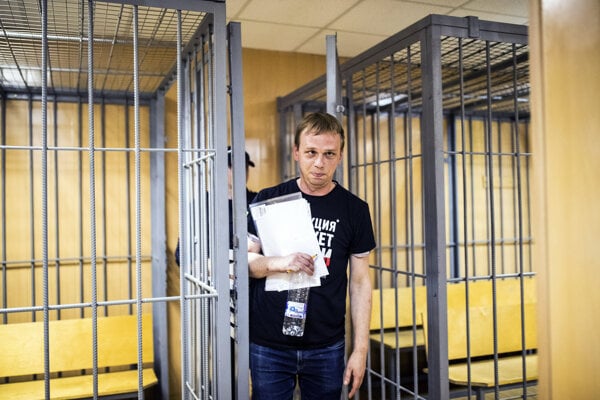 Ivan Golunov, a prominent Russian investigative reporter, who worked for the independent website Meduza, leaves the cage in a court room in Moscow, Russia on June 8, 2019. (Source: AP/SITA)
Font size:A-|A+16

Agents of the Russian Federal Security Service (FBS), who live both in Moscow and Slovakia, may be behind the bullying of Russian investigative journalist Ivan Golunov. The journalist had been facing controversial drug charges, but was released after major protests from both Russia and abroad.

Golunov’s colleagues have suggested that two FSB agents, Alexei Dorofeyev and Marat Medoev, are behind the controversial detention, as the Ján Kuciak Investigative Centre (ICJK) reported. Golunov accused the agents of corruption and managing the Moscow-based “funeral mafia”.

Igor Medoev, father of the Marat and an FSB agent himself, does business in Slovakia and owns some properties here, according to ICJK.

Golunov has said that the drugs discovered when his flat was searched were put there by the police. According to his colleagues, it was revenge for an investigative report he was doing on Marat and Igor Medoev and their links to the “funeral mafia”.

If it had been proven that Medoev had really been behind the attempt to discredit Golunov with the active involvement of the police, it would have show his influence not only on business and politics, but the FSB, ICJK wrote.

Igor and Marat Medoev are both FSB agents, meaning that they cannot do business according to Russian law. However, their family owns properties worth millions of euros in both Moscow and Slovakia. The companies, officially owned by their relatives, do not report any income or activities that would explain the origin of the money invested in the respective properties.

The properties in Slovakia are situated in Limbach, about a 30-minute drive from Bratislava. Out of the five villas in one of the complexes, Igor Medoev and his wife own one, while the other is owned by their daughter and her husband, who works for the Moscow town hall. The rest is owned by the Chvíla family, from whom Medoev purchased the two villas, ICJK reported.

ICJK talked with Igor Medoev. He said his family has nothing to do with Golunov’s case.

“Neither me, nor my son,” Golunov told ICJK. “I don’t even know what [Golunov] looks like.”

He considers it strange that Russian journalists are linking him to the case. Asked whether he tried to find out who was behind the attack on Golunov, Igor Medoev said he does not care.

“When a journalist was killed here and there was a protest, you watched it, your heart and minds hurting,” he told ICJK. “But mine weren't. Because this is not my country.”

He also considers the fact that he is on friendly terms with the Russian interior minister, who ordered Golunov's release, as proof of his innocence.