How to brew beer: This small brewery lets visitors see for themselves

Microbrewery Sessler restored the tradition of beer brewing in Trnava, offering tours around its premises. 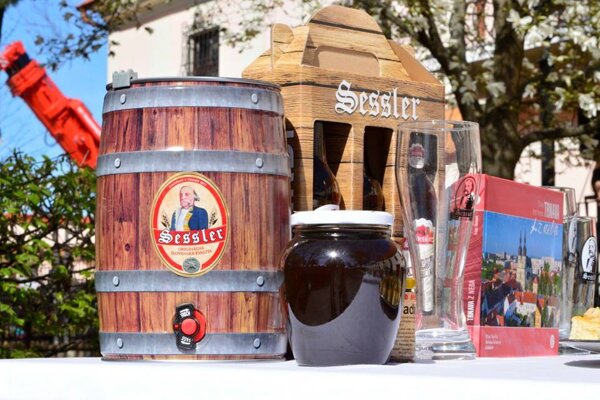 “What ingredients do you need to brew a beer?” asks Richard Murín, the brewer at the Trnava-based microbrewery Sessler, when starting a tour around its premises.

He is quick to offer the answer: you always need malt, water, hops and brewer’s yeast.

“To start brewing beer, first of all you need a recipe,” Murín continued, explaining that the beer styles brewed in Sessler differ from one another in malt, hop or yeast composition. Moreover, its flavour is affected by the water drawn from their own well, which is rich in calcium carbonate. “This set of specifications makes every beer a unique product.”

Sessler started brewing its own beer in 2008, restoring a tradition that dates back to the Middle Ages. Apart from selling beer, it also offers (not just) beer lovers a peek at its premises and the whole process, from malting the barley to brewing the beer.

The beginnings of beer production in Trnava date back to the 14th century. The city legalised it in 1419, when it was awarded by King Sigismund of Luxembourg the privilege of brewing and selling beer.

The brewery, where Sessler is now situated, was built in the mid-18th century and operated until the second half of the 19th century, when the beer production ceased.

The premises were bought by Jozef Sessler and his sons in 1872, and they began malt production. It has survived to this day, which makes Sessler the only microbrewery in Slovakia to have its own backyard malting house.

The production of beer was resumed only in 2008 by the current owners. Sessler now produces about 300 cubic metres of beer annually. The beer is neither filtered nor pasteurised.

See how beer is made

There are three different types of tours offered at Sessler, but to have the full experience, choose the one that includes the malting house.

The guide then leads the visitors through the process of converting the barley into malt. After receiving the barley and collecting it in the so-called hoppers, the cleaning process begins, followed by steeping, germination and kilning. The malt is then cleaned, with the removed rootlets used as fodder for animals. The cleaned malt is stored in the silos and then transferred to the customer.

Moving to the brewery, visitors receive more information about how beer is actually brewed. After peeking into two 2,000-litre pots placed in the restaurant, they move to another room to see the whirlpool, then the room where the beer is cooled and fermented, and stored in the conditioning tanks.

The tour usually ends with a tasting of the local beer directly from the tanks.

“We liked the personal approach,” said Peter Kubrický from Bratislava, who visited Sessler with his wife.