Four-day hike – where to sleep and what to expect. 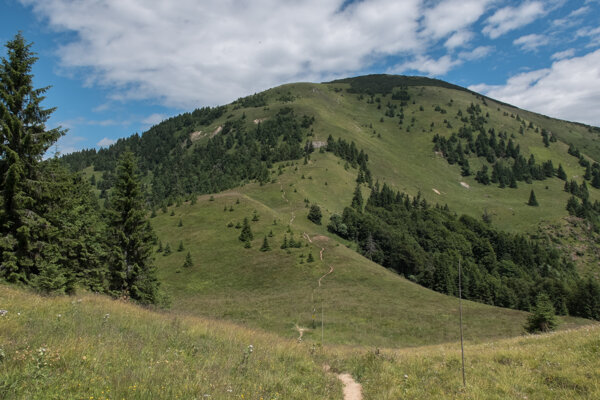 Back in the office on Monday morning after a four-day hike in the Veľká (Greater) Fatra mountain range, I unexpectedly found myself missing the eight-kilo backpack I had lugged around for the trip.

It wasn’t just a bag that carried everything I needed in it for the trip, for me it had become a symbol of, even if this sounds like a cliché, serenity, of making a break from civilisation, of nature in all its beauty and glory.

The idea of backpacking across the ridge of the Greater Fatra belonged to a friend of mine, Renáta Petríková. Her main goal was to climb the range’s 1,532-metre Ploská hill and, at the same time, escape for a few nights from civilisation.

“I had dreamed about this hike for ages,” said Renáta before the trip, explaining she had been inspired by her cousin who had hiked the ridge some years ago.

In the end, she and five other women, aged between 41 and 56, including me, joined Renáta as she fulfilled her dream in early July.

The Greater Fatra ridgeway is a well-marked tourist path leading south-north along its main ridge. Experienced hikers usually do it in two days, but we extended our Greater Fatra Expedition, as we proudly named our trip, to four days. This was because half our group had no experience with backpacking, and we weren’t sure if two days would be enough. We also wanted more time to enjoy the mountains.

We booked our accommodation in February, contacting what are more or less the only three places to stay on the route itself. These are often fully booked for much of the summer and anyone thinking of simply turning up during a hike in the summer months and getting a bed for the night are likely to be disappointed.

We set off from the village of Turecká, which is famous for hosting an annual competition in cooking and eating the traditional Slovak dish bryndzové halušky (potato dumplings with salty sheep cheese and roast bacon).

From here we climbed up the Greater Fatra ridge, with the total elevation gain of more than 700 metres. We made our way along an approximately 8-km trail, following the yellow and green markings for hikers, admiring the summer meadows blooming with flowers of all different colours, and took in the view to Krížna (1,574 m) in the distance. 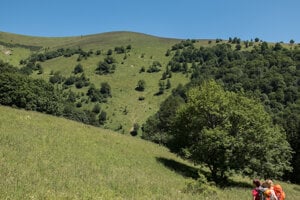 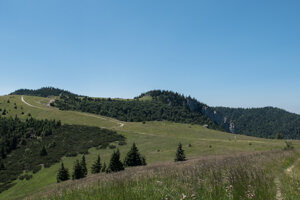 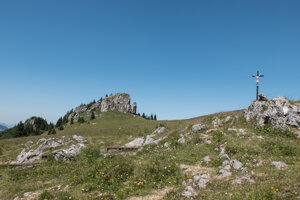 Shortly before reaching our first night’s accommodation - the Kráľova Studňa mountain hotel - we stopped at the spring of the Bystrica Potok brook which gives the nearby town of Banská Bystrica its name. The picturesque Kráľova Skala hill with a watering-place for livestock is nearby.

Secluded high in the mountains, the Kráľova Studňa (King’s Well) hotel at 1,300 m above sea level, is a perfect gateway to the Greater Fatra.

The hotel’s history dates back to the 1920s when the first mountain cabin was built on the site. Local legend has it that the name Kráľova Studňa came from the mediaeval King Matthias Corvinus (Matej Korvín) himself.

The hotel underwent an extensive reconstruction between 2006 and 2009 and now offers comfortable accommodation with a restaurant and wellness facilities.

However, while it boasts modern facilities, guests should be prepared because the electricity is turned off from 22:00 until 10:00 every night as the hotel is not connected to the main grid and instead uses its own generators. This means no light, and no way to charge mobile phones or camera batteries during the night.

Next morning, we set off for a 14-km hike towards our main destination for the day – Ploská peak. The undulating path took us across grassy uplands, created in the past as sheep pastures, which spread out on the hills around. In some places the grass, twisted by the wind, looked like a sea. 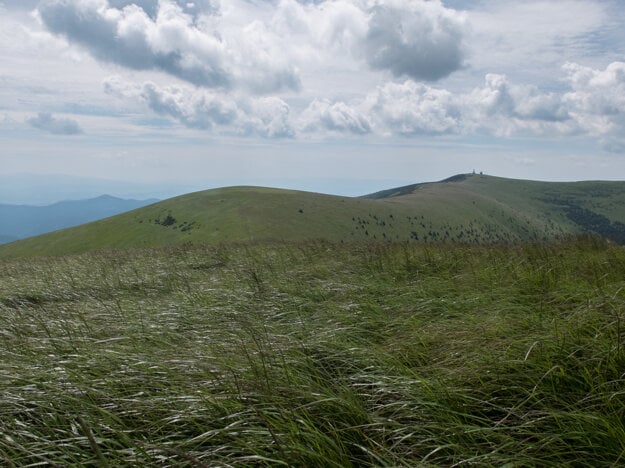 The grass, twisted by the wind, looked like a sea. (Source: Jana Liptáková)

Although a regular hiker in the High Tatras since her childhood, Viera Šramková, one of my companions on the trip, was making her first visit to the Greater Fatra.

“Compared to the High Tatras, which can sometimes seem harsh or even brutal because of all the rocks, the scenery of the Greater Fatra is softer,” she said.

The impressive rocky Suchý Vrch peak and its surroundings are known as a home to protected plants such as blue gentian (gentiana clusii) and edelweiss. Unfortunately, the flowers we saw were no longer in bloom. 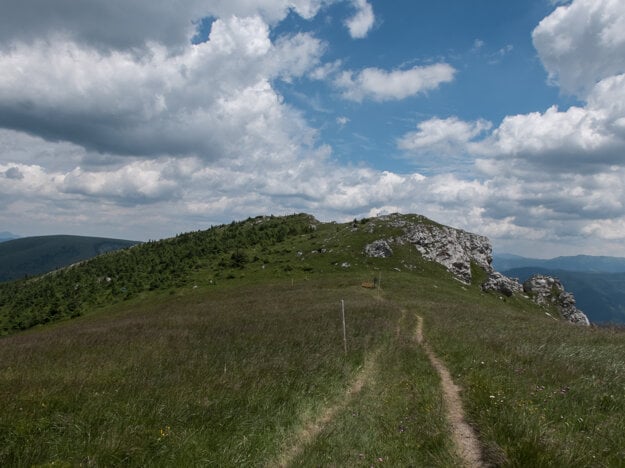 The impressive rocky Suchý Vrch peak and its surroundings are known as a home to protected plants such as blue gentian and edelweiss. (Source: Jana Liptáková)

Three kilometres before reaching our next accommodation, the Chata pod Borišovom mountain cabin, we came to a crossroads: the red-marked path led up to Ploská and the blue-marked path bypassed it, following a contour trail around the peak. We divided into two groups, one of which, including me, accompanied Renáta to the top. The others set off for the mountain cabin. 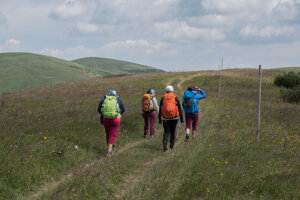 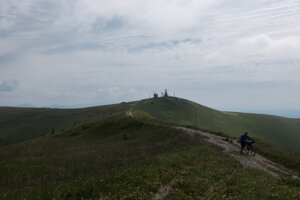 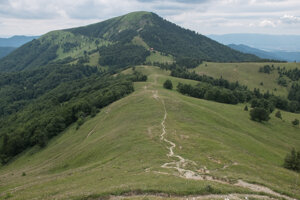 The hike up to Ploská, which in English means ‘flattened’, used up the last reserves of our energy. Although not steep – the elevation gain was around 200 metres – it was a demanding walk.

At the top, we were welcomed by some windy weather, and found the grave of a WWII partisan fighter.

After taking some obligatory summit photos, we descended along a steep path into the valley before climbing again to the Chata pod Borišovom. 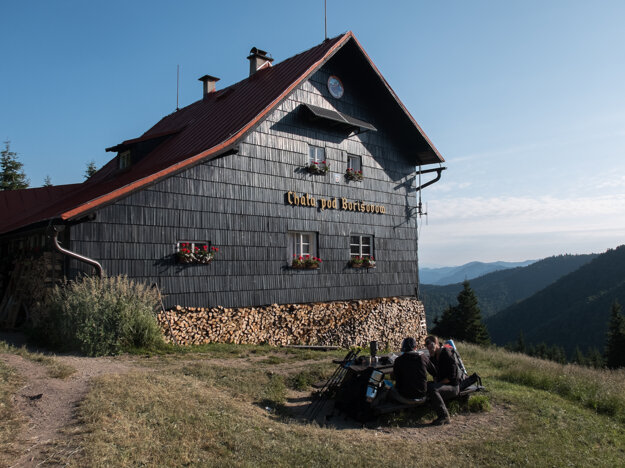 Built in 1936, it is the only genuine mountain cabin in the Greater Fatra offering accommodation all year round, with 24 beds in four rooms on its upper floor.

There is no road leading to it and all provisions and supplies needed to run the place have to be carried up by special hikers, or ‘mountain carriers’. There is no electricity and no flush toilets. It takes its name from Borišov peak (1,510 m), which rises above it.

It is a half hour climb to the top, where there is a magnificent panoramic view.

How to plan a backpack hike

Similar mountain cabins traditionally serve various thick soups like cabbage or bean soup and sausages while sweet buns with various fillings are also often on the menu. At Chata pod Borišovom, they served buns with apricot filling and sprinkled with cocoa granules and whipped cream. We also tried the local specialty – zázvorovica, a spirit made from ginger, honey and lemon - which was excellent.

“The evening at the cabin had a special charm, especially when the kerosene lamps were turned on after it got dark,” said Renáta, recalling the trip.

At 22:00 though we had to leave the restaurant as the lady managing the cabin told us she had to make rooms for some hikers as there were no beds left in the rooms upstairs.

During the third day of the trip the scenery changed as the mountains got rockier and tree cover grew thicker.

On the 14.5-km hike on the green-marked path to our last accommodation, the Granit Smrekovica hotel, we passed the Skalná Alpa nature reserve, a primaeval forest with spruce trees more than 200 years old. 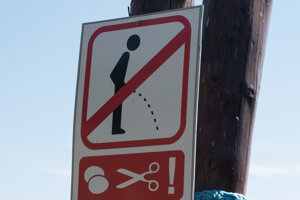 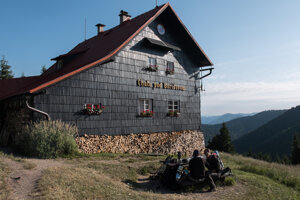 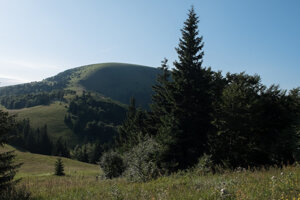 The route offered an optional steep hike up to the 1,567-m Rakytov peak which has one of the most beautiful panoramic views in the whole Greater Fatra. While I climbed the hill, the rest of our group continued on the yellow-marked trail bypassing the peak and winding its way through forests.

The Granit Smrekovica hotel is in a tourist resort with a history dating back to the 1920s. As well as wellness facilities, it has rooms with bathrooms, TVs and fridges - electricity was a matter of course here - and its services and amenities made it far and away the most luxurious accommodation of our trip.

On the fourth day we made the final 16.4 kilometre stretch of our hike to Ružomberok a bit easier by taking cable cars from Malinô Brdo down to the city, saving our knees from most of the descent with the total loss of 1,245 metres. 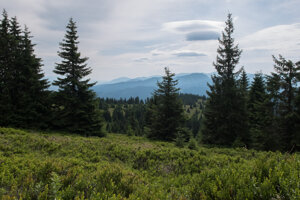 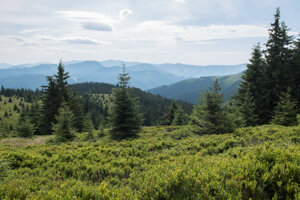 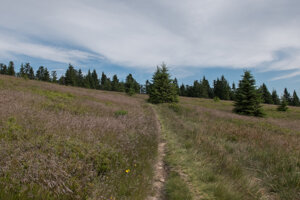 We were lucky during the trip in that we had good sunny weather with only one cloudy day. There were relatively few people on the trails, which made the trip even better for us.

Moreover, having no, or just a very poor, mobile phone signal on much of the hike really helped us feel like we were a long way from civilisation and enjoy the hike and the mountains.

“I went on this trip hoping to leave the day to day world and all its problems behind me and lose myself completely in the mountains,” said Jana Kupčová, one of my fellow travellers, after she got back. “And I really did.”