Embassy in London commemorated Seton-Watson, a proponent of the Slovak people

The ceremony held in the Scottish village of Abernethy was attended by several guests. 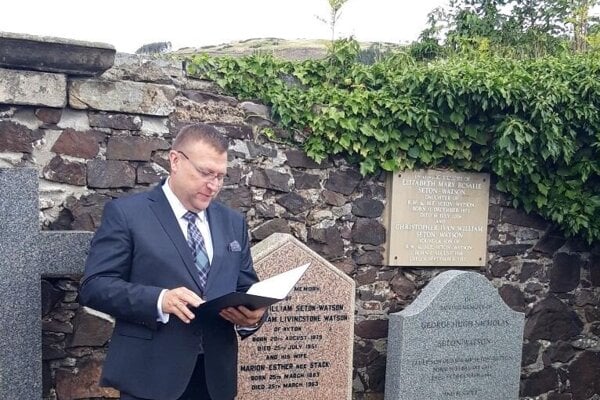 Slovak Ambassador to the UK Ľubomír Rehák in Abernethy, Scotland. (Source: Courtesy of the Slovak Embassy in London)
Font size:A-|A+110

A celebratory event commemorating the 140th anniversary of his birth was held on August 20 in Abernethy, Scotland, organised by Slovak Ambassador to the UK Ľubomír Rehák in cooperation with Honorary Consul of Slovakia in Glasgow, Craig Murray. It combined a church service and ceremonial bouquet placing.

Among the invited guests were the granddaughter of Senton-Watson; Ursula Sims – William, a representative of the Scottish government; Graeme Dey, a member of the Scottish parliament, the minister for parliamentary business and veterans; as well as general consul of Romania in Edinburgh and the representatives of local authorities, the Slovak Embassy in London informed.