Please admire us only from distance

Sysľovské Polia is an inconspicuous wilderness just a few kilometres beyond Bratislava. 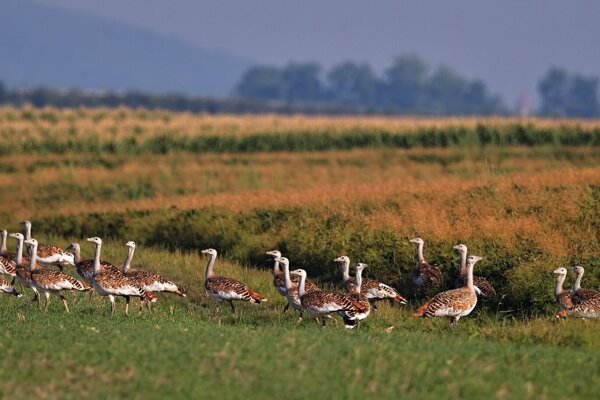 Those who want to see the largest flying bird in Europe have a place to go nearBratislava.

The civic association Raptor Protection of Slovakia is dedicated to researching and protecting birds of prey throughoutSlovakia. However, the special protection area of Sysľovské Polia just a few kilometres from Bratislava is a labour of love for the association. It is the only place in Slovakia where the largest flying bird in Europe – the great bustard – is found. The handsome red-footed falcon nests in Slovakia.

“It’s a pearl among protected areas inSlovakia,” said Jozef Chavko, chairman of the association, who began to shine with genuine enthusiasm as soon as he started speaking about the bustards and falcons. Thanks to the association’s activities, the latter began to nest in the area again.

The special protection area of Sysľovské Polia at the border withAustria and Hungary is one of the three bird protection areas of the great bustard in Slovakia. The second is Lehnice. However, the occurrence of this large, but colourfully unobtrusive bird is only sporadic in those areas. Sysľovské Polia, alongside the protected areas on the Austrian and Hungarian sides, forms an integrated area on which the approximately the 500-member West-Panonian bustard population lives. 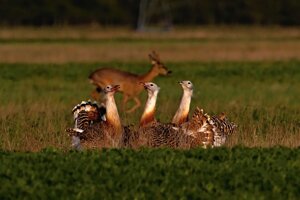 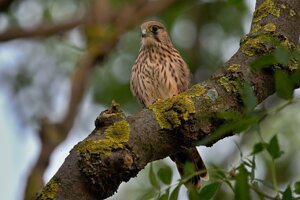 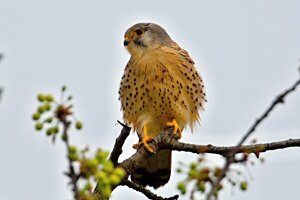 The Protected Bird Area (CHVÚ) Sysľovské Polia is located in the southwest of Slovakia near the border with Austria and Hungary. It is home to rare bird species. At the same time, this protected area is an important wintering place not only for the great bustard, but also for numerous flocks of migrating birds. This wintering place has an important strategic location for the birds as it is located in the centre of winter food territories along the axis of the important Danube migration corridor. The nesting of other rare steppe species, especially the saker falcon, montagu’s harrier and short-eared owl, has been recorded on the site, too. It is 1,773 hectares in size.

The colony grows and thrives mainly due to the appropriate management of the territory on the Austrian and Hungarian sides. The Slovak part is still dominated by huge fields of corn and rapeseed, which are unsuitable for bustards. Due to the height of the plants, the bustards cannot take off from them and do not even find suitable food. In contrast, inAustria and Hungary, the fields are smaller and the crops are more diverse. Local farmers also leave part of the fields lying fallow. This further increases the diversity of plants, insects and animals occurring in the area.

“The bustard is a very shy bird,” Chavko explains the reason of the ban. “It will fly away when you approach it at just 500 meters. Often intrusions stress the bustards and affect selection of the place for nesting. Also, bustard hens may leave a nest with eggs when repeatedly disturbed.”

The majestic steppe bird called the great bustard (otis tarda) is the largest flying bird in Europe. The male can weigh up to 20 kilograms. By comparison, the white-tailed eagle, which is the largest nesting bird of prey in Slovakia, weighs approximately 8 kilograms with a similar wingspan. The bustard received its Slovak name – the bearded bustard – after the cock’s ‘moustache’, which serves him like the mane of a lion – to attract the ladies. It is the most endangered bird species in Slovakia, while no bustard hen nested in the country this year. Last year, there nested four birds. By the end of the 19th century, its population in Slovakia was estimated at 2,400 individuals, but by 2000 it had practically disappeared from the area of ​​Žitný Ostrov and other areas north of the Danube River. At present, its occurrence is concentrated only in western Slovakia, with the highest number of individuals occurring in Syslovské Polia. In winter this area serves as a wintering and gathering place for more than 10 percent of the central European population of the bustard. The most sensitive period for the bustards is the nesting time from mid-March to the end of July. It feeds on plant food and insects and occasionally eats small vertebrates.

If the entry into the protected area were allowed, there would be a risk that, due to frequent disturbance, the bustard would move completely to the Hungarian and Austrian part of the territory. For now, nature conservationists hope that Sysľovské Polia, which the bustards like especially during winter, will spread to other areas ofSlovakia. This year conservationists have been watching them at Pezinok, in the foothills of the Little Carpathians and in Galanta.

Meanwhile,Austria and Hungary offer better conditions for the general public to observe bustards. There are several wooden observation towers with telescopes. One of them is, for example, near the cycle path by the Austrian village of Pama.

“During the mating cry, the bustard cock ruffles until he looks like a big white ball and can fight for territory and hens with a rival until they both have bloody beaks. Or when a 300-member flock grazes in the fields in winter – these are wonderful observations,” said Chavko.