Slovaks care about the environment and climate change; so should companies

More than one half of Slovaks still can't think of specific companies doing responsible business. 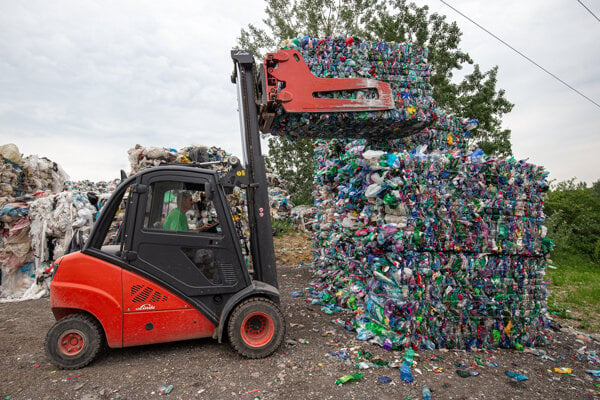 After visitors to Bratislava’s Magio Pláž beach produced tonnes of plastic waste last summer, its organisers decided to be more eco-friendly this year. They served drinks in returnable cups and offered paper straws.

A more environmental approach is a trend which has been lately confirmed by a survey carried out by the Focus agency for the Pontis Foundation and the Business Leaders Forum.

“I’ve been surprised the most by the increase in the importance of environment and climate change topics in the eyes of the public,” said Michal Kišša, CEO of the Pontis Foundation as well as the Business Leaders Forum.

Up to 53 percent of 1,021 respondents polled in the second half of October said they expect companies to deal with these issues.

In addition, more than 40 percent opined that companies should support socially disadvantaged and disabled people, and the education of young people.

People identify more with specific activities companies are doing in these fields and think they should be of a top priority for businesses, according to Kišša.

“This is fundamental progress and the public obviously feels that climate change affects all of us,” he added.

More than half of the respondents, however, could not spontaneously name any company doing responsible business. Those who could answer the question mostly named Lidl, Slovak Telekom, Orange, and Volkswagen.

“These companies actively communicate their CSR activities,” Kišša noted. “At the same time, they promote them in their communication.”

Thus, they educate and motivate their customers to take into consideration other aspects of goods and services than their price.

Among the most frequent reasons why a given company acts responsibly, the respondents named fair approach to employees and suppliers, and their treatment of the community and their surrounding.

One of the best known activities of Slovak Telekom, which also organises Magio Pláž, is supporting hearing-impaired people. It has been dealing with the topic for more than 17 years. Within the now-defunct Mobile Teacher programme, experts visited families to show them how to develop the abilities of their hearing-impaired children in domestic conditions.

“It was an invaluable help the state did not offer at the time; and it still doesn’t,” said Ľubica Majtánová, who participated in the project in 2013.

Slovak Telekom also helps connect families with experts. Thanks to this cooperation, two books have been published where families with hearing-impaired children can find useful information, Švrčková said.

Moreover, they support the Online Interpreter programme, which helps hearing-impaired people in their everyday communication by using modern technologies.

For their activities in this field, this year the company received the Via Bona award, which is granted by the Pontis Foundation to companies doing business responsibly, in the category of Good Community Partner.

Carmaker Volkswagen launched the up! city project in downtown Bratislava about two years ago, with the ambition to introduce new, sustainable forms of mobility to the public.

“We brought small Volkswagen e-up! cars to the capital’s streets, which met with positive reactions,” said Radovan Klein of the carmaker’s communication department. Since then, people have driven more than 400,000 kilometres on the cars.

Apart from vehicles, the company offers cargo, electric and children's bicycles for rent. The money it collects through their rental goes to the revitalisation of the square situated in front of the Old Market Hall. At the same time, they support various charity and cultural events in the city, Klein added.

The range of activities companies do to mitigate negative impacts on the environment is quite wide, from fighting food waste to delivering parcels on bikes. For example, the Pontis Foundation granted the Via Bona award in the Green Company category this year to the Nosene company, which teaches people how to bring old clothes back to life.

What is a responsible business?

For about one-quarter of respondents, responsible business means transparent entrepreneurship, an eco-friendly approach and no abuse of employees. For about 23 percent of respondents, it means caring for employees and their families.

Less than one-tenth of respondents define CSR as responsibility for products and their quality, responsibility for customers, and donorship and sponsorships. About 5 percent think the term represents good relations with suppliers or partners.

On the other hand, about one-fifth of respondents do not have a clue what responsible business means. This is still progress compared to last year though, since at the time nearly one-quarter of respondents could not answer the question.

When choosing from a list of specific CSR activities, a majority of respondents (62 percent) said that the most important attributes are equal conditions for all employees, as well as nice and healthy working conditions. For nearly half of them, clear, transparent and open communication of the company towards customers is important, followed by the environment and climate protection, air quality, work-life balance, and fair entrepreneurship.

The survey also suggests that up to 94 percent of respondents think that apart from generating profits, companies should define their goals in CSR. This includes environmental protection, care for employees, supporting communities, and transparent and open communication about activities.

Many companies are already doing it, and regularly broadcast their activities through media, social networks and their own websites.

What is missing, though, is more consumer activism, meaning that people should be more persistent in requiring companies to be responsible, said Kišša.

“If companies or their representatives don’t act in compliance with the law, consumers can push on them through their wallets and clearly demonstrate that this kind of business doesn’t have a place in society,” he added.​​​​​​