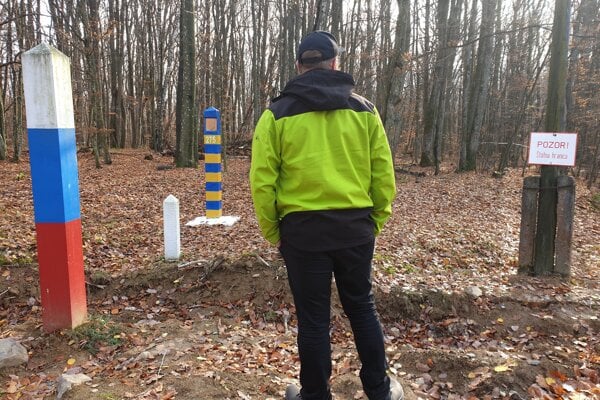 Slovakia’s almost 100-kilometre border with Ukraine has been part of the EU and Schengen Area’s Eastern border since 2004. A tempting entry point into the EU for illegal immigrants, thousands of people have tried to cross it illegally. But the number of attempted illegal crossings is falling and in the first half of this year was in double figures, compared to the thousands 15 years ago.

Reporter Nina Hrabovská Francelová travelled to south-East Slovakia to meet border police patrolling the area and locals who are wary of strangers but unwilling to let the tragic ends met by some illegal migrants go forgotten.

When police go into the Border Police station in the village of Petrovce near the border with Ukraine, one of the first things they see is a black commemorative plaque with the names of a former head of the border police and a soldier.

Both men were killed on March 19, 2002 as they tried to catch someone illegally crossing the border. Chasing him, they did not know that he was a killer on the run from the Ukrainian authorities and before he could be arrested, he managed to shoot the pair, as well as injuring another officer.

This was no typical illegal immigrant though, as another memorial just 12 kilometres away in the town of Sobrance, which was unveiled on November 16 this year, shows.

The simple concrete pillar is a memorial to the tens of people found dead in the forest along the border. Most of them are remembered with only the words “unknown man” or “unknown woman”. Only two have been identified and named.

The 97.9-kilometre border with Ukraine forms part of both the EU and Schengen Area’s Eastern border. Many of those illegally crossing it are seeking a better life in the EU. But the number of people attempting to do so is dwindling, according to statistics, and local people.

Ľuboslav Tóth, 45, has served as a Greek Catholic priest in the village of Koromľa, near Petrovce, for twenty years.

He said that in that time he has buried two migrants found nearby. One of them, he said, he came across himself while he was out walking in the forest one day.

“I was picking mushrooms in forests at the back of the village with an altar boy. I asked him, can you smell something?” Tóth recalled.

They spotted a corpse in the stream and called the police. Officers said the body had been lying in the forest for months. They were unable to determine the gender. The body was buried in the village with the words “unknown person” on the gravestone.

This was in 2001. A year later, another body was found near the village. Father Tóth asked the locals to come to the funeral. “Nationality, race or religion does not matter - everyone deserves a funeral,” he says.