He stood next to Orbán when the latter spoke about an invasion. 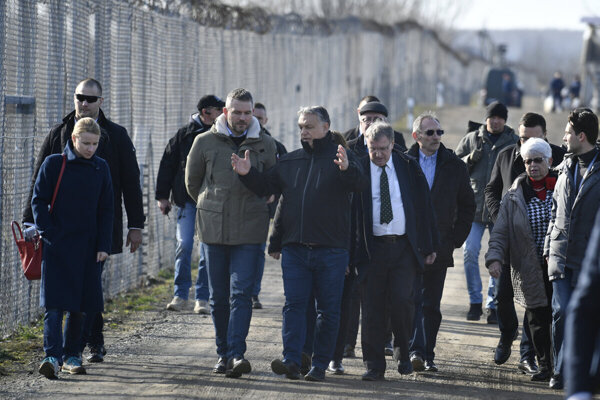 Hungarian PM Viktor Orbán (centre) and his Slovak counterpart Peter Pellegrini (centre-left) during their visit at the transit zone for migrants in Röszke on the Hungarian-Serbian border. (Source: AP/SITA)
Font size:A-|A+5

If an increased number of migrants plan to cross the southern Hungarian borders, Slovakia would be ready to help Hungary with the necessary number of police officers and technology.

Slovak PM Peter Pellegrini (Smer) said so while visiting the Hungarian-Serbian border near the village of Röszke together with his Hungarian counterpart Viktor Orbán on February 13.

“I fully comply with the words of Mr prime minister that this is also the southern Schengen border for Slovakia,” he said, as quoted by the TASR newswire. While Slovakia protects its eastern border with Ukraine, which also borders the Schengen Area, on its own, in the case of southern borders, it needs to collaborate with Hungary, he added.

Orbán warned against the increased pressure of migrants on the southern borders, claiming that the number may increase with the improving weather. He continued that it is hard to protect the borders of the EU without the help of allies.

“We can’t talk about this in Europe, but it’s an organised invasion,” Orbán said, as quoted by TASR, adding that not only Hungary, but also other countries are building fences.