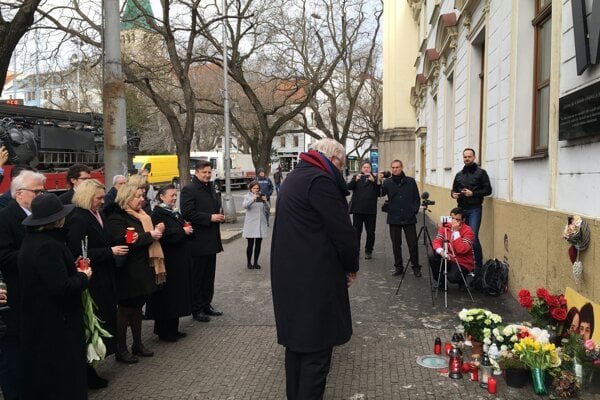 Members of the diplomatic community in Bratislava gathered near the Church of the Visitation of Virgin Mary on SNP Square to commemorate the second anniversary of the murders of Ján Kuciak and Martina Kušnírová.

The young couple was shot to death on February 21, 2018 in their house in Veľká Mača (Trnava Region).

Read also:Several events will commemorate two years since the murders of Kuciak and Kušnírová Read more

After the diplomats in attendance lit candles and placed flowers by a picture of the young couple, they observed a moment of silence.

“I think society in Slovakia was clearly shocked by this terrible murder,” said British Ambassador to Slovakia Andy Garth. “The diplomatic community was horrified by it as well, but it's also reassuring that the police were able to identify the people responsible.”

Soon after the dead bodies of Kuciak and Kušnírová were discovered on February 26, 2018, the police said that the murder was most likely linked to Kuciak’s journalistic work.

Marián Kočner, Alena Zsuzsová, Tomáš Szabó and Miroslav Marček have since been charged in the murder case and have been on trial since January 13, 2020. Zoltán Andruskó, who admitted to having acted as the middleman between those who ordered the murder and those who executed it, was sentenced to 15 years in prison on December 30, 2019, in a separate proceeding.

Couple remembered in Slovakia and abroad

Several other events will honour Kuciak and Kušnírová.

The opposition Freedom and Solidarity (SaS) party will light candles in memory of the murdered couple in SNP Square at 14:00. The official programme will start at 16:00, where the families of Kuciak and Kušnírová will be present, the SITA newswire reported.

Gatherings organised by the For a Decent Slovakia initiative under the “For Ján and Martina, for a decent country” motto will take place in more than 50 places across Slovakia and abroad.

The initiative will also organise other events between February 21 and 29 across the country, titled “Ján Kuciak and Martina Kušnírová Week”.

“I really hope that people will continue to recognise the valuable work that journalists do for the underpinning of democracy,” said Ambassador Garth. “It’s important that we protect journalists from those who try to unduly influence them and do them harm.”